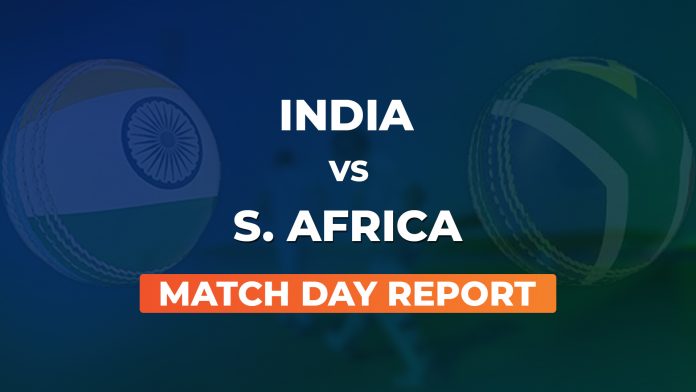 The day three of the first Test between India and South Africa was filled with excitement for both the teams with ther respective players doing well almost all day. The task confronting South Africa was enormous. They had lost three wickets and were confronted with Ravichandran Ashwin and Ravindra Jadeja on top of their game on a wearing pitch. The ghosts of 2015 were all set to make an appearance again for the Proteas. However, Dean Elgar, whose highest score in India was 48 in 2015, defied the odds and smashed his maiden ton in India.

Elgar and Temba Bavuma started the day well but Bavuma was an early casualty, falling LBW to Ishant Sharma with a delivery that cut back in and stayed low. At 63/4, South Africa had an uphill task but South Africa skipper Faf du Plessis led from the front and Elgar's solid play also gave South Africa confidence. With Elgar using his feet and negating Ashwin brilliantly, du Plessis joined in and got going with a couple of boundaries off India's ace offspinner.

Elgar's confidence and du Plessis' aggression slightly upset India's plan as Kohli opted to attack. However, after the lunch break, the 115-run stand was broken when du Plessis stabbed a flatter ball from Ashwin only to get an inside edge onto his pad and Ajinkya Rahane at short leg taking a sharp catch. If India thought they could get an opening, they were made to wait. Quinton de Kock, who smashed two fifties in the T20Is, continued his good form.

De Kock effortlessly went past 50 and Elgar also notched up his second 150-plus score. India was running out of ideas and suddenly, South Africa sensed that they could turn the tables on Virat Kohli's side. However, on 160, Elgar top-edged a slog sweep of Jadeja and Cheteshwar Pujara took a good catch at deep midwicket to end his epic vigil. The wicket was Jadeja's 200th in Tests and he became the quickest left-arm spinner to reach the landmark.

Following Elgar's dismissal, de Kock neared his ton and he notched up his century in a similar way as Elgar, with a six. Ashwin floated a delivery on off stump and de Kock powered it over wide long off for his first ton against India. However, the bowler had the last laugh and when he sent back de Kock and Philander, he had picked up his 27th five-wicket haul.

At the end of the day, South Africa was still trailing by 117 runs with mere three wickets in hand. With the cracks getting widen up, it wouldn't be a tough task for the Indian team to wrap things quickly.