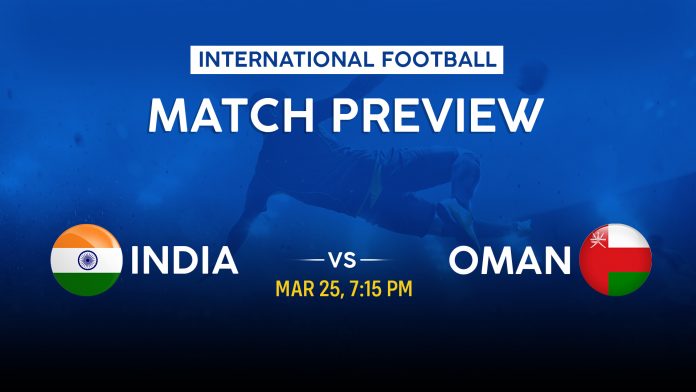 Indian Football team will start their international assignments in Dubai with an international friendly affair against Oman. India have never defeated Oman in international football and they would look to change the history on Thursday.

India will resume their international football season and they reached Dubai for a friendly affair against Oman. India will play two matches in Dubai and the second match will be played against UAE on Monday. India and Oman last met in World Cup qualifier in 2019. Oman defeated India in a two-legged qualifier with an aggregate success of 3-1. In the first leg at home, India struck early through Chhetri’s goal but Oman found the victory at the last minute. Muhsen Al-Ghassani’s 33rd-minute goal secured another win for Oman in 2nd leg game.

Oman is entering into this fixture with an impressive seven-match unbeaten streak against India. Both sides have played each other in five World Cup Qualifiers and two friendlies. This match will be played at a neutral venue. India will also participate in the second round of World Cup qualifiers in June. Igor Stimac's men will be boosted after the recent preparation at Indian Football League 2020-21. The tournament had 11 teams this season and we saw some quality players performing at the big stage. Men in Blue lost seven matches against Oman and played two goalless draws as well. This Indian side looks optimistic to defeat Oman.

Brandon Fernandes, Sahal Abdul Samad, and Ashish Rai have been dropped due to injury concerns but they included some in-form players like Ashutosh Mehta, Ishan Pandita, Akash Mishra, Bipin Singh, Lalengmawia, Liston Colaco, Yasir Mohammed, Jeakson Singh, and Suresh Singh. Ishan Pandita and Akash Mishra are likely to make their international debut for India. Sunil Chhetri’s absense will also hurt India who opted out due to his positive COVID report.

Gurpreet Singh Sandhu was off the colours for Bengaluru in Indian Football League and Igor Stima can pick Amrinder Singh as the main goalkeeper who made 10 clean-sheets for Mumbai this season. Sandesh Jhingan, Ashutosh Mehta, Akash Mishra, and Adil Khan might play in the defending line. Ishan Pandita will get the reward and he will lead the forward line along with Manvir Singh. Pandita scored 4 goals for Goa and all came at crucial phases of the game while Manvir Singh netted 6 goals for Mariners this season. There is no injury concern from both sides for this fixture. Oman held strong Jordan for a goalless draw when they last played a friendly. They finished second in World Cup qualifier Group E and are 4-points behind to Qatar. They will go with a 4-3-3 formation against India. Oman has a good balance and they had good practice against Jordan last week.