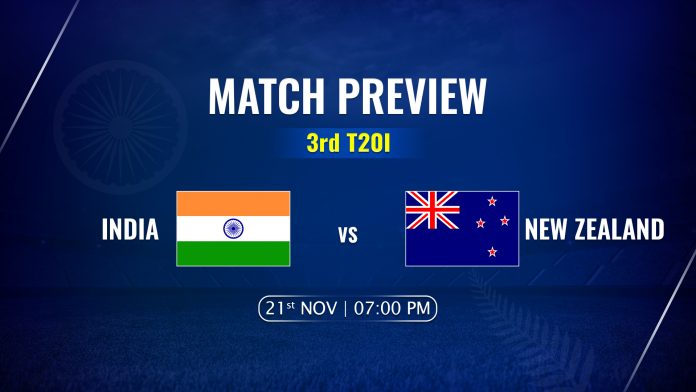 In the three-match T20 series between India and New Zealand, India have won both of their two opening matches to clinch the series. The third and final T20I of the series will be played on Sunday, November 21 at Eden Gardens, Kolkata. Team India will look forward to whitewash the Kiwis in their last match.

India have clinched the series by defeating New Zealand in the opening two T20Is in the home series commenced on 17th November. Despite their poor performance in the World T20 Cup, team India performed brilliantly in the opening two matches. Both the openers, Rohit and Rahul played a brilliant innings. Rishabh Pant played the role of a match finisher in both the matches. The team also has young batsmen like Venkatesh Iyer and Shreyas Iyer.

New Zealand, on the other hand, who have a brilliant record in International Cricket Board tournaments against India, looked helpless against India in this T20 series, probably because the team is missing the services of Kane Williamson. However, Martin Guptill is doing well against India. New Zealand could not score big due to a middle order failure after a good start in the previous match. Chapman, Mitchell and Glenn Phillips got off to a good start but could not convert this good start into a big score.

The minimum and maximum temperatures at Kolkata will be 22 and 32 degrees, respectively. The humidity will be around 64 percent with a bit cloud cover during the day.

The matches at the Kolkata stadium have not seen a high scoring match so far, as a result, the batsmen may have to struggle a little. The effect of dew and moisture can be seen in this match as well. 142 Is the average score on this ground and the teams will like to bowl first after winning the toss.