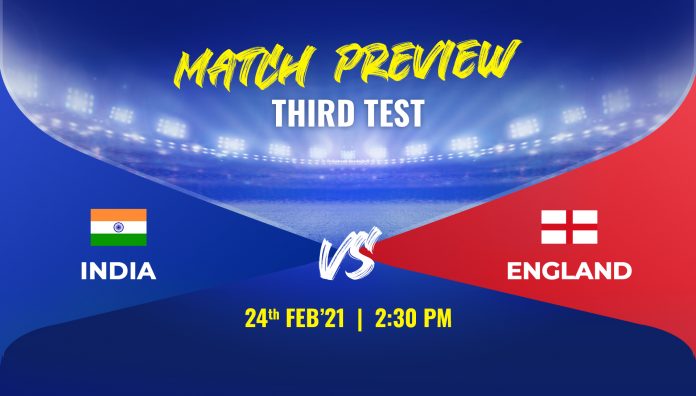 India and England will be back in action for the pink-ball Test in Motera. The series is now leveled with 1-1 and the losing side of this Test will be eliminated from the WTC Finals.

India and England will lock horns in world’s biggest cricket ground and it will be a pink-ball Test. India outclassed the English side in the second Test of the series to stay alive in the series and the World Test Championship Finals. After losing the first Test, Rohit and Rahane were on the radar but the duo performed high in the second Test. Rohit played one of his finest Test knocks and Rahane showed an impact with a gritty half-century. In the 2nd innings, Ashwin also scored a hundred and Kohli got a crucial fifty. The Indian bowling unit was far better in the last Test. Ashwin bagged five in the first innings and Axar Patel scalped five in the 2nd innings to feature in the elite club of Indian bowlers who picked fifer in debut Test. India’s team combination is perfect. Indian fans would expect a century from their skipper who hasn’t scored a ton from last one year.

The pink-ball memory is not ideal for India after the disaster of Adelaide but they are playing at home where they defeated Bangaldesh in only D/N Test. Ishant Sharma will play his 100th Test and India may go with an extra pacer. Umesh Yadav can replace Kuldeep Yadav and Bumrah will be back in place of Siraj. India can also think about Hardik Pandya who can be effective with his pace and he can also provide an extra batting option. If India wins this Test, Kohli will become the most successful Indian Test captain at home.

Meanwhile, England are down after the heavy defeat in the second Test. It exposed their batting and bowling. The Pink-Ball test might be an ideal game for them to take the lead again in this Test series. England’s rotation policy is also creating issues and they are not getting the best team-combination. Moeen Ali is back home and Bairstow will be back as the wicket-keeper. It means Foakes will be dropped. Anderson and Archer both will be back in the pace-attack. Olly Stone impressed in the last game and England can try him as the third seamer or they can continue with Broad for this Test. Crawley is also fit and he may replace Rory Burns who had poor numbers in the series. England will go with one spinner and Jack Leach will be there.To fulfill the second spin option, Root is there who have shown his skills with the bowl.

The WTC Finals will also be in mind for both England and India. They cannot lose a game in next two matches in Motera. England have to win this Test match to stay in contention. India can also not afford a defeat as they will be out of the race. It’s possible that the next two matches will surely produce results and you cannot think about the scoreline of 2-1. India would enter as the favourites after gaining big confidence from the last victory.

Motera’s track is an ideal track for batting but with the Pink-Ball, conditions will be changed. Pacers can draw attention in the final sessions and spinners will be in command in the afternoon session. Batting in the fourth innings would be a tricky call.