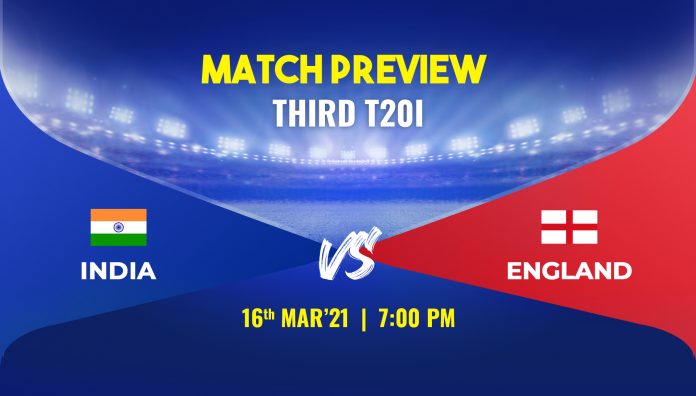 India will face off England in the third T20I to take a lead in the 5-match series. India defeated England by 7 wickets in the last T20I on Sunday.

India and England are playing T20s on alternative days on the same ground and they will be back in action for the third T20I on Tuesday night. India bounced back hard in the second T20I to level the series. Indian bowlers put a disciplined bowling-show to restrict England to 164 and India chased down this total with 13 balls spare. India lost KL Rahul early but Ishan Kishan and Virat Kohli constructed the chase with cracking half-centuries. The skipper finished the chase with a six in the 18th over.

Team India’s changes are surprising everyone. After resting Rohit in the first game, Shikhar Dhawan was rested in next game. Suryakumar Yadav and Ishan Kishan both made their international debut. Kishan scored a half-century on his debut and it means, he will bat along with Rahul in the third T20I. Rohit Sharma may sit on the bench for another match or Indian management can rest Rahul to pick Rohit in the opening slot. India will avoid any change in its bowling unit. Bhuvi and Thakur will be two front-line pacers with Pandya as their support. Sundar and Chahal will lead the spin attack.

Indian side showed their caliber in the second game. In the opening game, they didn’t understand the pitch and failed against the extra seam. India will avoid any drama in the series and look for a victory in the third T20I to make an early chance to win the series. India now have an edge over England in the last 8 T20Is since 2018. India overcame Morgan’s troops five times and lost three matches only. India have been a consistent T20 side after losing just two matches in the last one year.

Meanwhile, England lost their first match after four consecutive victories. They had the chance when Roy was set and they had wickets in hand. Indian bowlers didn’t allow English batsmen to offer acceleration in death-overs. They failed to achieve a good total on this batting track. Changes are unlikely to happen. Mark Wood’s change was forced and England may recall their pacer. Buttler didn’t impress in both games and England have to fix out their slight issues. The Bowling unit was also exposed after picking the early wicket of KL Rahul. They are a compact T20 side and will surely aim for a comeback.

Motera’s track offers good assistance to batsmen and it also allows spinners to take the charge in middle. Toss will play an important role. Chasing side will have an advantage. Any score above 170 would be a competitive total.