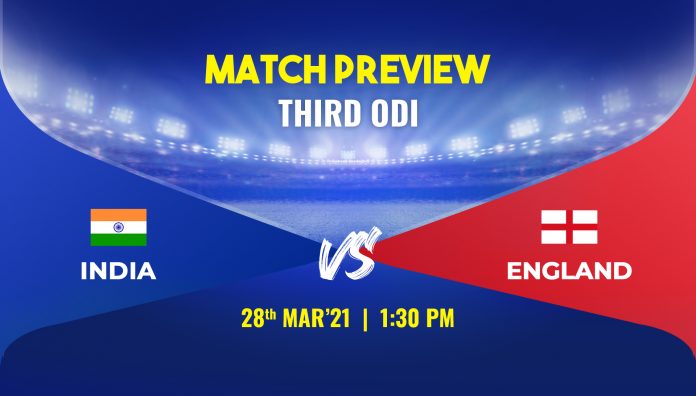 India and England will fight out in the decider game of the series. England bounced back in the series after winning the second ODI.

India and England will back in action for the final time in this long assignment. England avoided the series defeat after winning the second ODI and both sides will feature in the decider game on Sunday. England outplayed India with the batting brilliance in 2nd innings to chase down their highest total against India. Jonny Bairstow and Jason Roy continued their top game with the 13th ODI century stand in just 43 innings. Bairstow scored his 11th hundred but acceleration from Stokes did wonder for England. They made a mockery of this chase.

England are lucky in the toss and they would look to win it for the third time. England’s changes worked for them. Topley was impressive with the new ball but England have to overcome their death-bowling issue. They conceded 126 runs in the last ten in the previous game. Adil Rashid is also effective in middle-overs. England have adapted to this attacking approach since their 2015 WC debacle. They attack from the early powerplay and maintain the run-rate. England lost just one ODI series since 2016 and their record in bilateral series is exceptional. England lost just one away ODI series since 2015 which came against India in January 2016. They have the loophole in their bowling but overall, they are a compact ODI side. Jos Buttler would look to avoid any changes in the squad and the winning XI will feature in the final ODI.

Meanwhile, India have to look for improvement after the defeat in the second ODI. Bowling was so poor that England chased down 337 with 39 balls spare. India are going through similar issues they have seen in the last two years. They won the first match due to a batting collapse of England. India is not taking wickets in the first powerplay and this concern haunted them in New Zealand and Australia as well. India’s ODI success mattered when their spinners provided breakthroughs and controlled runs in middle-overs but since 2019, Indian spinners are lacking the most here. The 5th bowling option is an all-rounder who concedes easy runs when main bowlers fail to perform. India has to break this pattern to build a good ODI side.

The time has come when Kuldeep Yadav has to prove himself in the domestic circuit. Krunal Pandya cannot replicate Jadeja as Indian management requires a bowling all-rounder, not a batting all-rounder. Prasidh Krishna and Bhuvneshwar Kumar bowled very well but it wasn’t enough on a surface like this. Kohli’s captaincy was out of context. He didn’t use bowlers according to the plan when Stokes and Bairstow were smashing our spinners. Changes are likely to happen. Rohit Sharma faced injury issues and his availability is in doubt. Kuldeep might be replaced by Chahal and Suryakumar Yadav can replace Rohit if the Indian opener fails to achieve match-fitness. India’s home record is impressive and if they win, it will be their third straight ODI series win. India are favourites and if they manage to win the crucial toss, the game will be in India’s favour for sure.

Pune’s track is now a batting paradise and after two matches, we may expect a high-scoring game on Sunday. Dew factor can offer an extra advantage to batsmen. Toss will surely a key factor and chasing sides will have an advantage.