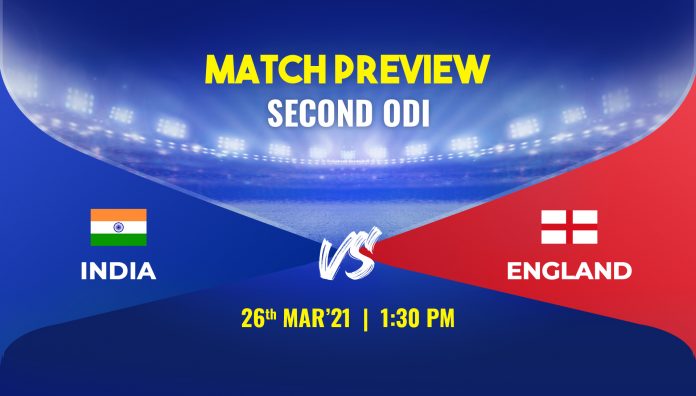 India will take on England in the second match of the 3-match ODI series. India would look to wrap up the series while England will look to bounce back to avoid a back-to-back series loss.

India and England will face each other in the second match of the series. England have the big pressure ahead of the second ODI. England’s campaign in CWC Super League hasn’t been convincing and they might lose back-to-back bilateral series. Between 2015 and August 2020, England lost only one ODI series which came against India in 2016 but in the last six months, they are on the verge of losing two ODI series. They suffered a 2-1 loss against Australia at home and in their first away assignment, they are already behind in the series. Out of 7 matches in CWC Super League, England lost four matches.

England put a good show in the last game but slipped at the crucial phases. When they picked Pandya, then India were slightly behind in the game but England conceded easy runs in death-overs. 112 runs for the 6th wickets allowed India to post 317. Roy and Bairstow provided a dream start by adding 135 runs in 14.1 overs but England formed an epic batting collapse by losing 10 wickets on just 128 runs. They offered victory to India on a plate and now, India is just one win away to win their first ODI series win after January 2020. India lost to Australia and New Zealand in the last two ODI assignments with winning just one game out of six. India are undefeated at home and it will be their third straight ODI series win. India also defeated England in 2016’s ODI series.

India are going through some injury concerns and Kohli will make few changes in the squad. Shreyas Iyer has been ruled out from the series and even from the first half of the Indian T20 League. Suryakumar Yadav will make his ODI debut on Friday. Rohit Sharma had issues with his elbow and he will rest from this fixture. KL Rahul may take the role in the opening slot and Rishabh Pant will bat at number 5 or 6. India may also try Chahal in this game to drop Kuldeep. England also have one injury concern as Sam Billings is recovering from the injury. If he doesn’t get fit, Livingston can make his ODI debut. Morgan has also been ruled out of this series and Dawid Malan will replace him. England are optimistic to make a comeback in the series as they haven’t lost an ODI series with one game in hand since 2015. The number one ODI side in the world can lose their spot if they see whitewash from India.

Pune’s track is a batting paradise. The track offers good assistance to batsmen and we may expect a high score in the second match. Pacers can take some help from the pitch in the early ten overs. Chasing would be a great call after winning the toss.