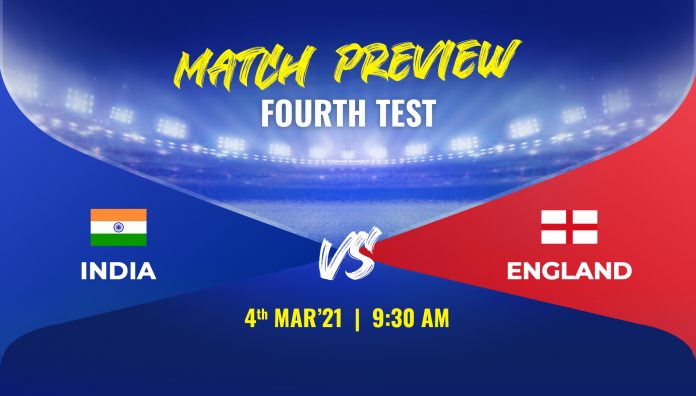 India and England will end their WTC campaign when they lock horns in Motera for the final Test of the series. India have taken a 2-1 lead in the series, and they need to play a draw to qualify for the WTC Finals.

World’s largest cricket stadium will witness the finale of this most-anticipated series. India bounced back hard after the shocking defeat in the opening Test. They overcame the English side in the next two Tests with huge margins of 317 runs and 10 wickets. The last pink-ball Test was ended in less than two days. Team India will also look at this Test as the qualification for the World Test Championship final. After eliminating England from the Finals, India’s only contender is Australia. If India loses this Test, they will be knocked out, and Australia will face New Zealand in WTC Final. India are strong favourites considering the quality spin-attack. Axar Patel bagged his maiden 10-wickets haul in the last Test, and he bagged three 5-for in this series. Ashwin completed his 400 wickets in Test cricket, and he is leading the spin-attack.

India will be without the service of Jasprit Bumrah, who has been ruled out of this Test due to personal reasons. India can try Umesh Yadav as the second seamer with Ishant Sharma. Virat Kohli is likely to go ahead with two-seamers and three spinners. Washington Sundar replaced Kuldeep in Pink-Ball Test, but Kohli didn’t try him as a bowler. Team management can look for Kuldeep to better the spin unit. Rahane has just one half-century out of five innings, and it’s a big concern. Rohit Sharma has been a standout performer, but Gill also needs some runs to take the confidence. The skipper would also keen to end the century-drought.

Meanwhile, England will move on from the pitch drama. They have been outplayed by the spin, and they cannot stay at the same topic. They played back-to-back matches at the spin track and surrendered. After scoring a huge 578 in the first innings of the opening Test, England have been bowled out below 200. In the last match, they scored just 81 in 2nd innings, England's lowest total in India. Joe Root has been the lone warrior of this team who shined even with the bowl and scalped his maiden fifer in Test cricket. Root hasn’t got fifty since his double-century in Chennai. England have focused on rotation policy, and it hurt their preparation. Bairstow got ducks in both innings, and Ben Stokes was also off the colours. England is struggling against spin, and they have to play an extra-ordinary game to stun India in the fourth Test.

England will recall Dom Bess in the playing XI, and they will drop either Broad or Anderson. Jack Leach has bowled very well, and his figures are impressive. He bagged 16 wickets in this series at an average of 26.75. Jack Crawley was in good touch in his first test in India, and he will continue at the top with Sibley. England didn’t avail advantage despite restricting India on 145 in the first innings. The Three Lions are already out of the WTC Finals, but they will now look to end the Test series with 2-2.

Motera’s track is highly helpful to spinners, and the match will be played on pitch no. 4 which will allow spinners to take control of the game.  The surface will be slightly better for the batting but on day 4 and day 5, it will offer extra help to spin. Win the toss and bat first will be the ultimate call to take early advantage of the pitch.