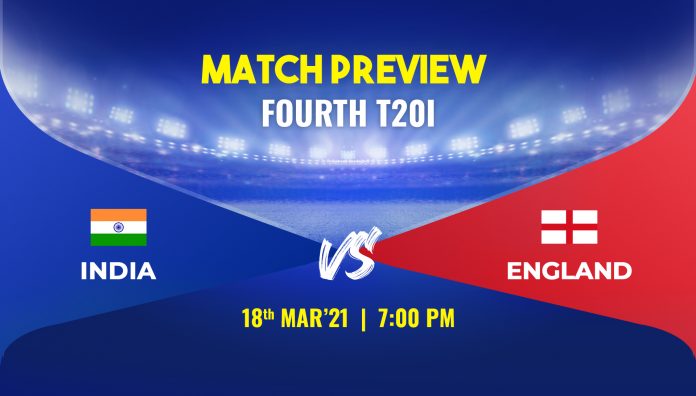 India will face England in the must-win game of the series tonight to avoid the series defeat. England have taken a 2-1 lead after the 8 wickets victory in the previous match.

India-England T20I series in its final stage and both sides will lock horns in the fourth T20I tonight. England outplayed India in the third T20I to take an important 2-1 lead in the series and they are just one win away to script another T20I series.

India allowed England to dominate after a poor batting show in the first ten overs. Kohli played a blistering knock in the end to take India 156 which was chased down by England with ease, courtesy of Jos Buttler’s 52-balls 83. England have the golden chance to win a series in India. England’s record against India in the overall T20I series is not so convincing as they lost the last two series against India. They even haven’t won a T20I series at home. Morgan’s troops are going through a dream phase in the T20 format.

England last lost a T20I series in 2018 against India. They have lost just three matches since the COVID break and won eight. The team combination is strong. Mark Wood was impressive with the new ball and the Indian side struggled against him. Adil Rashid controls runs and Archer takes the charge in death-overs along with Jordan.

India’s too many changes policy is hurting their process. They have played with different openers in all three games and still, didn’t find the best pair. KL Rahul got three ducks in his last four T20I innings and he might be dropped in the fourth T20I to allow Rohit and Ishan Kishan to open. Suryakumar Yadav can find his name in playing XI or India can look for an extra bowling option to reduce the pressure from Pandya.

India’s record in T20Is has been outstanding and they last lost a T20I series in 2019 against Australia. Since then they have been a dominant unit in the shorter format of cricket. Top-order’s form is a big concern for Team India. In the first match, Shreyas Iyer took charge and in the next two matches, Virat Kohli led this struggling batting unit. The collective brilliance is missing from India.

Motera’s track is an ideal track for batting and it’s producing enough assistance to pace. Toss will again play an important role and the chasing side will have an advantage.

Handy as an opener and scored 56 in his debut match