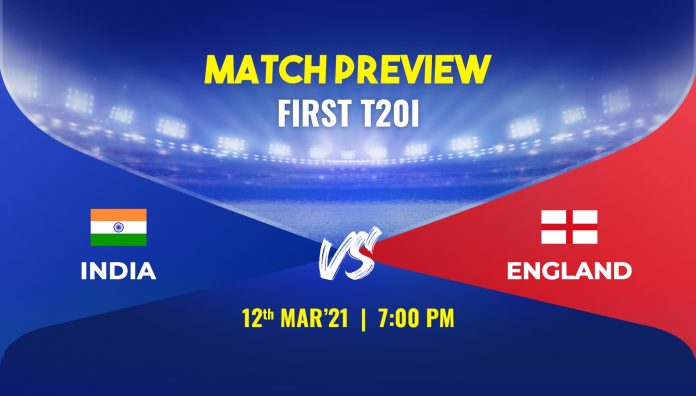 India and England will start the 5-matches T20I series with an opening match in Motera. It will be a first home white-ball series for the team India.

After a competitive Test series, both England and India will be back in action for a white-ball assignment. India will play the first white-ball series at home after the COVID outbreak. This series will also decide the top rankings. If India wins this series 5-0 or 4-1, they will grab the top spot in the T20I rankings. India have boosted their side by picking uncapped players from Indian T20 League. Ishan Kishan and Suryakumar Yadav both had a remarkable season for Mumbai in the last edition and they had good form in the domestic season. Suryakumar Yadav may find his name in middle-order. Rishabh Pant can also make a comeback but Kohli may try KL Rahul as the main wicket-keeper. Changes are expected. Rohit and Rahul will open for India. It means Dhawan may sit on the bench.

Considering the surface of Motera, India will try two core spin options with Axar and Chahal. Washington Sundar will play as a batting all-rounder and he will be effective in the powerplay with his spin. Pandya will play as a complete batsman and he might not bowl again. Natarajan is not fit so Chahar and Bhuvi will be the main seamers. India can also look for Shardul who can provide a batting option too. The team combination of India is pretty strong and they have shown their strength in Australia. India defeated Australia and New Zealand with ease. In 2020, India lost just one T20 out of eight which is remarkable. Indians have also defeated England in the last two T20I assignments in 2016 and 2018.

Meanwhile, the visitors are going through a dream form since their historical success in 2019. The finalists of the 2016 T20 World Cup are coming off some serious form in the T20 format. They whitewashed South Africa recently and defeated Australia 2-1. After COVID, England lost only two matches out of 9 matches. They got match-winners in last one year. The batting combination might be changed. Morgan tried Buttler at the top on some occasions but this time, he can go with Jason Roy and Bairstow in the opening slot. Malan is the current number one T20 player in the world and his serious form boosted England. Morgan is the leading run-scorer for England since the 2019 WC win.

The Three Lions will pick Adil Rashid and Moeen Ali to better their spin-attack. Mark Wood might replace injured Archer and Jordan will start for England. England has the depth in their batting unit. They have a weak point in bowling when you compare with India. It will be a cracker game of contest and both sides would look to start the series on a happy note. T20 World Cup is just 7 months away and both sides will try to build their best team for the mega event.

Motera’s track is good for batting and it’s an ideal surface for T20. Spinners will be in command later the match progresses. Chasing will be a better call after winning the toss. 160-170 is a per score on this track.