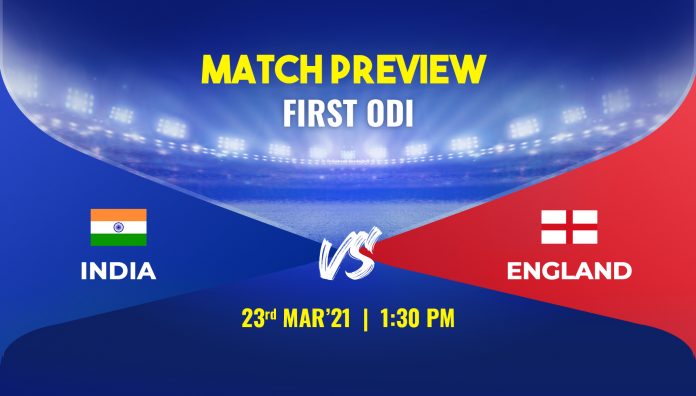 India will take on England in the first matches of the 3-match ODI series under the CWC Super League. India would look to end the home season with a win.

India and England will kick start the ODI assignment in Pune and three matches will be played under ICC’s CWC Super League. India’s start to this new league-system hasn’t been so impressive as they lost to Australia 2-1. India’s last ODI series win came in 2019 when they defeated West Indies at home. Since 2019, the ODI preparation for India is not convincing. India recently defeated England in the T20I series and they are confident to add one more series win against the World Champions.

Dhawan and Rohit will be back in the opening slot and Kohli will bat at number three. Shreyas Iyer would bat at number 4 and Surya may replace KL Rahul at number 5. Rahul has been outstanding in ODI format but his current form put questions on his availability in this series. Krunal Pandya had a tremendous performance in the domestic season and he can get the reward to fulfill the vacant spot of Jadeja. It means, either Chahal or Kuldeep will feature as the main spinner in the squad. Bhuvneshwar Kumar and Shardul Thakur will be two front-line seamers. Natrajan might be the third seamer. He would be effective in death-overs.

Meanwhile, England had a good record since their 2019 World Cup triumph but their main players haven’t played much ODI cricket. They beat Ireland in their first assignment of CWC Super League but lost to Australia in the next which was their first bilateral series loss in five years. Their one ODI series was postponed against South Africa. Out of six Super League matches, the English side won three and all three defeats came in the last four matches. Morgan’s troops are currently the number one side in Rankings and India comes second. This series might not affect their Rankings. Morgan is preparing England for the next World Cup which will be held in India in 2023.

Jofra Archer will be missed and Mark Wood will have the big responsibility in pace-attack. Liam Livingstone might earn an ODI cap on Tuesday. England found the new middle-order batsman Sam Billings in last home summer and he has been terrific for England. Roy and Bairstow will open, followed by Billings, Morgan, and Buttler in middle-order. Joe Root will also not be there in middle-order so it would be a big concern. They have good depth in batting but there is a loophole in their bowling. In the last two ODI series between two sides, India and England won each. In 2017, India were the winner by 2-1 at home and they are unbeaten at home since 2019’s 3-2 ODI loss to Australia.

Pune’s track is good for batting but it offers little bit of help to spin. The track has a lot of runs and we may expect 300 plus total in both innings. Dew might be a big issue so chasing will be a good idea after winning the toss.