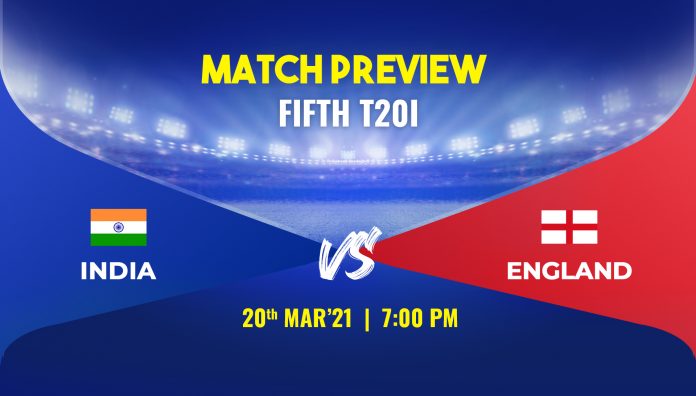 India and England will battle out in the decider game of the T20I series. India edged past the English side by 8 runs to level the series 2-2.

India and England are ready for the final game in Motera and it will be a decider after the series-leveling win from India in the fourth T20I. The series has been pretty competitive so far and India broke the pattern of chasing sides winning the game. They defended the total and secured 8 runs victory in the do-die game. With each game, India are getting a new match-winner and Suryakumar Yadav showed positive intent in his debut T20I innings. He was the victim of a poor call from the third umpire. Shreyas Iyer scored 37 off just 18 to charge India 185. Stokes almost took the control but in death-overs, Indian bowlers held their nerves.

Team changes are the big element in India’s T20 combination and we can expect at least one change in the final XI. KL Rahul got a good start but didn’t convert and he might be replaced by Ishan Kishan. If it happens, we will see five Mumbai players playing in the Indian squad. Pandya conceded just 16 in his 4-overs spell and picked two wickets. Rahul Chahar was introduced in the last game and he grabbed two for 35. Kohli will not drop him and try to go with the same bowling unit. Motera’s track suits this combination.

Meanwhile, England needs to rethink their ideal combination and they can find some issue in their batting unit. Roy has been consistent but Malan’s form is a big concern who had terrific numbers in T20s last one year. Bairstow also struggled in middle-overs. Mark Wood and Jofra Archer both are the key players for England and they have been terrific in the series but the same spark was missing from Chris Jordan. In the last two games, English bowlers wasn’t impressive in death and conceded more than 100 in the last ten. They couldn’t capitalize the powerplay pressure in middle overs and death.

England's record in the T20s is outstanding and they would a series loss in World Cup year. They last played a 5-matches series in this format in 2019 against New Zealand and won the decider game. Both India and England have defeated their opponents in the 5-match T20 series before. If England loses, they will lose a T20I series after almost 3 years. Their team combination is great and they have to improve their mistakes. Toss might play an important role here but still, holding the nerves, in the end, will be key.

Motera’s track is good to bat and it offers good amount of assistance to batsmen. Spinners might be expensive but can draw attention in middle-overs. Toss will still play an important role and chasing sides will have an advantage.