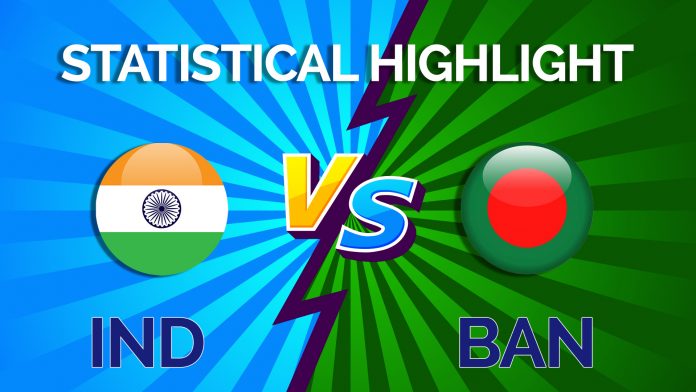 The India vs. Bangladesh series on Thursday witnessed the second game being won by the hosts. The first game of the series was a close-edge encounter between the team, won by the visitors, all credits to Mushfiqur Rahim’s unbeaten 60 off 43 balls.

However, the hosts jumped back in the game with much power, leveling the series at 1-1 at the end of the second game. Everything started when India won the toss and chose to field first on a batting pitch in order to take benefit of the dew factor. The decision proved worthy as India chased a score of 154 in just 15.4 overs.

Many records were created, and many were broken, just another story of creating history. Well, we have summed up all the statistical highlights of the series up till now in one post so that you need not bother yourself checking facts at different places. Read here:

The first game of the series witnessed the 1000th match being played in the history of T20Is.

India and Bangladesh have met each on the field for a total of 9 times, wherein it was always India that emerged victories. However, things took a turn during the first game of the series when Bangladesh registered their first-ever victory against India in a neck-to-neck encounter.

Rohit Sharma, the captain of Indi’s T20 side, is known for registering his name in the golden pages of history quite a few times, and something similar happened during the second game of the series. Rohit played his 100th T20I game on Thursday, becoming the second male player to play 100 T20I matches.

Rohit registered yet another record under his name when he played the 320th T20 match of his career, becoming the most capped player among the Indian cricketers. He is followed by Suresh Raina, who stands at 319 T20 matches.

Yuzvendra Chahal achieved the tag of the most T20I wickets by an Indian Bowler at home during the second T20 of the series. He has picked 26 wickets in home T20 matches and is followed by Jasprit Bumrah, who stands at 24 wickets.

Another big achievement came for Rohit Sharma during the second game when he knocked off 85 runs. He achieved recognition for Highest Individual Score by an Indian Captain in the Second Innings of the Game.

Shikhar Dhawan and Rohit Sharma played an effortless inning during the second game, which laid the foundations of Team India’s victory. With this the players bagged the feat of highest partnership for any wicket by India against Bangladesh in T20Is.

Rohit Sharma was on a record-breaking spree during the game and, thus, managed to get a lot of new records registered under his name. Touching a total of 2537 runs, he has surpassed Virat Kohli to become the most run-scorer in the T20Is.

Soumya Sarkar and Mushfiqur Rahim, Bangladesh’s two big names and reasons behind their victory in the first game of the season, put up a 60-run partnership in the first T20I. This is the second-highest partnership for any wicket by Bangladesh against India.

Mushfiqur Rahim’s unbeaten 60 off 43 balls is the third-highest individual score by a Bangladesh batsman against India.

Rohit registered got yet another record added to his name. Being a T20 captain, he managed to hit 37 sixes, the most by an Indian T20I captain, surpassing MS Dhoni’s tally of 34 sixes.