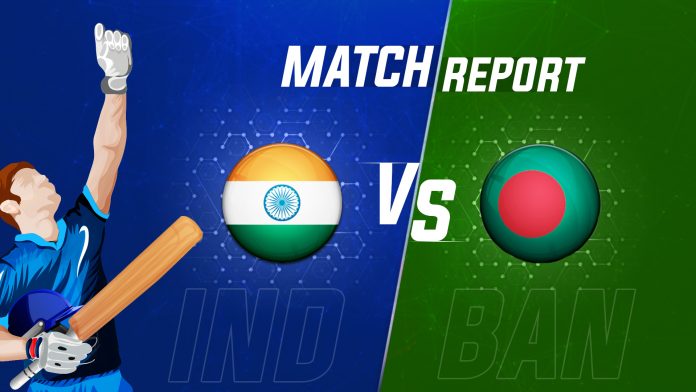 Rohit Sharma’s exquisite innings of 85 powered India to an easy 8 wicket win therefore levelling the series 1-1 in Rajkot.Rohit Sharma was at his sublime best as he dismantled the bowlers scoring 85 from just 43 balls. Rohit along with Dhawan scored at a brisk pace as they didn't allow the bowlers to settle. The dew Helped the openers as the spinners found it difficult to hold the ball and therefore went for plenty.The pair added 118 before Dhawan got bowled. Rohit who was looking for his 3rd Century got out soon after but the damage was already done. Shreyas Iyer and K.L Rahul added the remaining 29 runs and took India home.

Earlier in the evening,India won the toss on a batting pitch and Rohit Sharma, who is playing his 100th t20, decided to chase as the dew was expected in the 2nd innings. Both teams named the same XI from the previous match. Bangladesh’s openers gave an explosive start by dispatching Khaleel Ahmed for 14 runs in the opening over. Khaleel Ahmed who went for 18 runs in the penultimate over in the previous match was again expensive conceding 44 runs in 4 overs with a solitary wicket of A.Hossain. India were sloppy on the field for the first 10 overs as they conceded overthrows and dropped Liton Das. Liton and Naim put on 60 runs partnership but a middle order collapse negated Bangladesh's early advantage. Mosaddek and Aminul were slow in the death overs, and that allowed Deepak Chahar and Chahal to pull things back at the death. Chahal who was brilliant in the last match continued his form, He applied the brakes with 2/28 in 4 overs. Washington Sundar and Deepak Chahar supported the leg spinner well and they restricted Bangladesh to a below par 153.

Rohit made his intentions clear with the third over by hitting Mustifizur for 2 Boundaries and a Six. After that there was no stopping of him as he dispatched the spinners for maximums. Dhawan also supported Rohit well by scoring a tidy 31. Rohit reached to his half century in just 23 balls. He smashed six sixes and boundaries for his 83. Apart from the fielding it was a good performance by team India and they will be looking for the series win in the 3rd T20. With the series levelled, The third T20 will be the decider which is on 10th Nov at Nagpur.