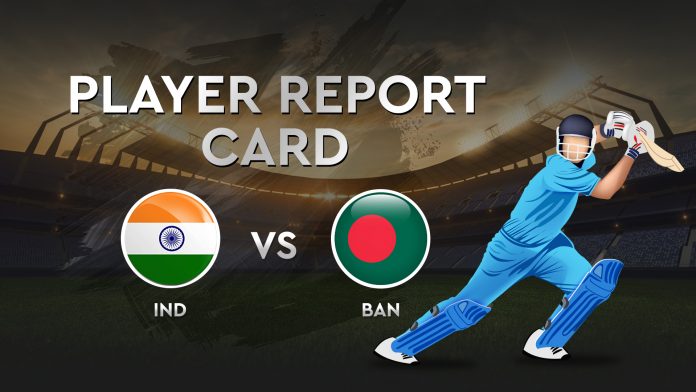 On Sunday, India completed their seventh consecutive win as Virat's troops decimated Bangladesh and won the match by an innings and 46 runs. Virat’s classy century and Ishant’s lethal bowling were the highlights of the pink-ball Test.

Bangladesh, on the other hand, badly missed the services of their star players Shakib and Tamim. Apart from Rahim, none of the Bangladesh players put on a fight against the mighty Team India.

So, after the recently concluded Test series, how did all the players perform? Let’s analyse in our India vs Bangladesh Test series player performance report card.

Rohit Sharma made a strong comeback in Test side with a remarkable performance against South Africa, but the Indian Opener had a rare lean series against the Bangla Tigers. Rohit scored just 27 runs in two innings at an average of 13.50. Although we missed Rohit’s Magic with the bat, he redeemed himself in the slips. Rohit took a blinder in the first innings to dismiss Bangladesh skipper Mominul Haque.

Mushfiqur Rahim was the lone warrior who fought hard against India. The wicketkeeper-batsman continued his good form against India and managed to score two fifties. Many cricket pundit still thinks the batsman is batting at the wrong position, and the experienced player like him should come up the order to strengthen the middle order.

After a rare duck in the first Test, Virat Kohli roared back in style by bringing his 27th century in the pink-ball Test. As always, Virat’s innings was decorated with class as the batsman smashed some breathtaking cover drives. With the century Virat also surpassed Ricky Ponting to become the second most centurion as a Test captain. He also completed 5000 runs as a Test captain and became the first Indian to do so.

The ever so dependable Pujara again showed why he is so crucial to the team. Pujara came in early in both the matches and formed some significant partnerships with Mayank and Kohli. Pujara has now scored four fifties in his last five innings. But his inability to convert those fifties into big hundreds in the series was one negative point.

Rahane is enjoying his scintillating form in Test format as the Mumbai batsman now has scored four fifty-plus scores in last four innings. The batsman formed some crucial partnerships with Virat Kohli and Jadeja and helped India to establish a big first-innings lead.

Ishant Sharma’s form in the red ball cricket has been excellent over the past few years and he proved his mettle with the pink ball as well. His bowling in the series reminded us of the 2007-08 Australia series, where he was simply unplayable. The pacer took 12 wickets in the series at an average of just 10.8. He was adjudged player of the series for his memorable performance.

‘Second innings Shami’  is at the peak of his career. The Right arm fast bowler has been India’s go through bowler in 2019. Shami has picked up 33 wickets in 8 Test matches this year at an average of just 16.66. Shami was no different against Bangladesh. He bowled some Unplayable spells and some deadly bouncers that Bangladesh batsmen couldn’t handle.

Umesh Yadav continued his amazing patch on Indian pitches by giving yet another stunning performance with the ball. The bowler took 8 wickets in the pink ball Test and decimated Bangladesh batsmen with his sheer pace. He has given a pleasant headache to the team management as Bumrah and Bhuvneshwar Kumar too are on the verge of return.

Abu Jayed was a one-man army in the bowling department. Jayed bowled with a big heart and was rewarded for the same. He sent the Indian skipper for a duck in the first Test and got some big wickets of Rohit Sharma, Cheteshwar Pujara, and Ajinkya Rahane.