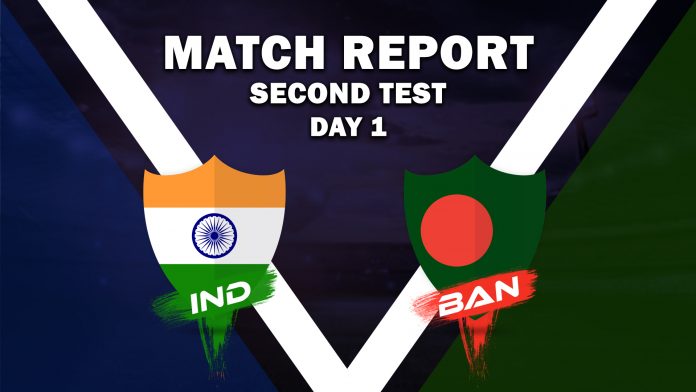 The first day of the historic day-night Test cricket in Kolkata belonged to India. Indian quicks were all over Bangladesh as they bundled them on a paltry score of 106. Ishant Sharma led the attack with his 10th five-wicket haul while Shami and Yadav had 2 wickets and 3 wickets each. India ended the day with 174/3 with skipper Virat and his deputy Rahane still on the crease.

After Indore, Bangladesh’s batting woes continued in Kolkata as well as their batsmen surrendered with a woeful score of 106.  Just like the first Test, Bangladesh struggled after opting to bat as they lost three quick wickets with just 17 runs on board. Opener Shadman did show some resilience but couldn’t convert his good start into a big inning. Liton Das too looked in touch but had to depart after Shami’s quick bouncer hit him in the forehead. Mithun, Rahim, and the skipper Mominul all went to the Pavilion without troubling the scores.

Two Concussion Substitute in one day

Bangladesh dreadful day with the bat became more painful when two of their players took a blow in the head. Wicket Keeper Liton Das was hit on the helmet by a Shami bouncer in the 20th over of Bangladesh's innings. He decided to bat on but walked off seven balls after being hit. Nayeem was hit off the third ball he faced, but he too continued batting. While there was one bowler for bowler swap with Taijul Islam taking Nayeem's place, Mehidy Hasan, a specialist spinner, took over from Liton, a wicketkeeper-batsman as Bangladesh had no specialist batsmen in reserve.

Just one over of spin!

Quickies showed their mettle as they steamroll Bangladesh with their sheer pace. Ishant who took his 2nd five-for in India after 12 years was at his best as he along with Shami and Yadav left Bangladesh in ruins. It was complete dominance by pace trio as they bundled out the visitors in 30 overs. In India where pitches are tailor-made for slow bowlers, The spinners bowled a combined total of just one over.

Pujara and Kohli Steadied the ship

India lost the openers relatively early but the duo Pujara and Kohli steadied the innings and added 94 runs together. Both the batsmen got to their respective fifty but Pujara once again failed to convert his start. Kohli and Rahane managed to take their side through stumps without any further damage.

India have a healthy lead of 68 runs and they will look to make it an unassailable one on Day 2. Bangladesh, on the other hand will hope to restrict India to a bare minimum.