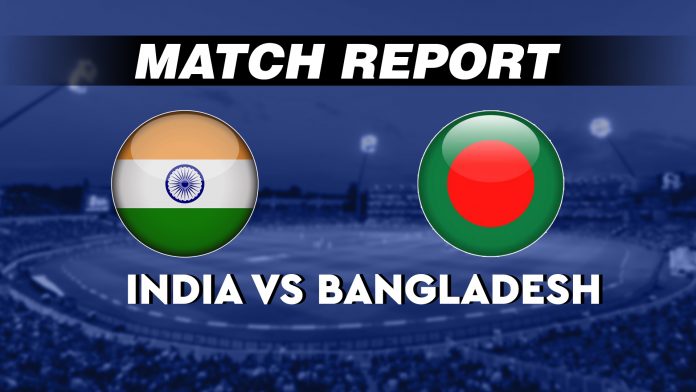 The first of three-match T20 International series between India and Bangladesh was evenly poised till 18th over of the second innings. There were a few moments which made India favourites, and a few which had made it go in favour of Bangladesh. However, with four back to back boundaries from Mushfiqur Rahim's willow in the penultimate over of the innings change the course of the game as the visitors managed to take 1-0 lead at Arun Jaitley Stadium in Delhi.

Delhi – which was hosting its first International after being renamed as Arun Jaitley Stadium witnessed 1000th T20I. Unexpectedly, wicket behaved differently with the ball coming onto the bat nicely, true trounce off the pitch and some lateral movement at the start of the innings which wasn't seen for a while now.

With Nidahas Trophy memories still fresh in every Bangladeshi player's mind. Mahmud Ullah, skipper of Bangladesh was quick to opt for a bowl on a batting paradise after the toss fell in his favour.

Rohit Sharma and Shikhar Dhawan started off the proceedings for the Indian team, with a former smashing couple of boundaries in the first over before a slower ball outside off deceived the Indian captain. The lack of pace from the youngster made the ball get through his defence shot and the umpire was quick to raise his finger.

His departure early in the innings led KL Rahul to the crease. Back in Indian colours, Rahul looked confident in his short stay at the wicket before getting dismissed by Aminul Islam. Rahul looked to cut but it hit the bat near the bottom half. Eventually, it was a check shot, and it lobbed in the air for a simple catch at short cover.

His departure was a blessing in disguise for the Indian team with both the batsmen finding difficult to rotate the strike. Just when Shreyas Iyer was looking in ominous touch having smashed two maximums on his way to 11-ball 22 runs, he tried to do a little extra which eventually cost him his precious wicket.

Shivam Dube got out for 1 on debut while a set Skhikar Dhawan got run out after a terrible mix-up. Rishabh Pant too failed to fire and got out in a bid to accelerate. Towards the end, Washington Sundar and Krunal Pandya smacked a few lusty blows which helped the Indian team to finish for a respectable total of 148 runs.

In response, Bangla Tigers were off to a similar start with Deepak Chahar striking in very first over of the innings. Liton Das, who had smashed a boundary off the second ball went onto play a loose shot on a ball going away from him. KL Rahul, who was patrolling the point region didn't do any mistake.

His departure brought Soumya Sarkar to the crease. He along with Naim Sheikh stitched a partnership of 46 runs before Chahal ripped Naim in his first over. Naim failed to pick the wrong'un and went after it. The ball failed to get the distance as Shikhar Dhawan completed the formalities at long-on.

Sheikh's wicket turned out to be a blessing in disguise for Bangladesh camp as Sarkar along with experienced Mushfiqur made the most of the conditions and went after Indian bowling. The duo targeted their bowlers and slogged hard on every loose delivery.

They continued to rotate the strike with ease and eventually came close to India total. At one stage, it looked that the men-in-green will complete the formalities with ease. However, Indian skipper, Rohit Sharma, who has been in these conditions for quite some time in past was quick to assess his bowlers and asked Khaleel Ahmed to bowl the seventeenth over instead of Yuzvendra Chahal.

Sarkar tried to get cheeky but failed miserably as the left-hander got a thick inside-edge which dislodged the stumps. For a moment, it looked that the Indian team has been able to make a comeback. However, in the eighteenth over of the innings, Krunal Pandya dropped a sitter of Mushfiqur Rahim which changed the course of the game as Rahim went onto score his fourth T20 International fifty to guide Bangladesh home.

In the end, India have a lot to think about on their flight to Rajkot. Bangladesh will be celebrating tonight, but also looking at converting this maiden T20I win over their hosts into a maiden series win over them.