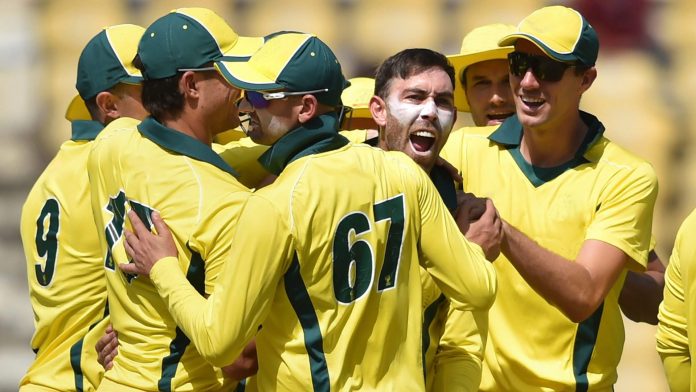 Australia beat India by 35 runs in the fifth and final ODI played at the Ferozeshah Kotla ground on Wednesday claiming their first ODI series in two years. India lost their third match in a row as Kohli lost his first home series as captain.

Australia set the target at 272 after Australian skipper, Aaron Finch won the toss and chose to bat first. India made 237 runs in 50 overs. Indian batsmen being sent back to the pavilion by Australia’s excellent bowlers like Adam Zampa, Nathan Lyon and Glenn Maxwell kept the Indian batsmen on a tight leash especially leg-spinner Adam Zampa who took 3/46 out of 11 wickets. Rohit Sharma with his 41st half-century in this match registered 8,000 runs in ODI cricket. He achieved the feat in his 200th inning thereby equalling former Indian Captain Sourav Ganguly, also at 200th inning.

Australia added 76 runs for the first wicket as Handscomb joined hands with Khawaja to drive the Aussies to their victory. India hit back hard and got crucial wickets to restrict the Australian team (272/9). Bhuvneshwar Kumar (3/48) was the pick of the bowlers. India lost wickets at regular intervals and was reduced to 132/6.

Australia rode on a spectacular century by Usman Khawaja. He continued his exceptional form and registered his second century of this series and his ODI career as well. Khawaja (100) made 383 runs in this tournament. Khawaja now has the maximum number of runs in a five-match bilateral ODI series against the Men in Blue.

It was the first time in two years that Aussies win an ODI series after being down 2-0. After losing the first two ODIs, Australia made a stunning comeback in Ranchi and Mohali and ended up being winners at the final match in Delhi.