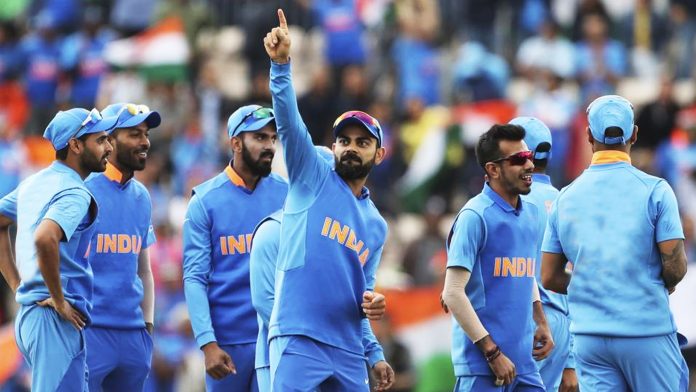 India and Australia have witnessed some greatest matches in the World Cup. In the 2011 World Cup, India knocked out Australia in the quarterfinals and Australia took the revenge by defeating India in the 2015 World Cup semifinal.

This year as well the rivalry continues as, Virat Kohli led Indian team made a statement after defeating Australia in the league stage of the World Cup for the first time. After winning the toss, the Indian skipper, Virat Kohli opted to bat first. Indian openers, Shikhar Dhawan and Rohit Sharma, laid the foundation for the big score by adding 127 runs for the first wicket. Shikhar Dhawan made his second century against Australia in the World Cup, the first Indian batsman to do that. The left-hander went on to score 117 runs while his opening partner, Rohit Sharma scored 57 runs.

Now the platform was all set for the other batsmen to take the advantage. After the dismissal of Rohit Sharma in the 23rd over of the innings, came in the number one ranked batsman, Virat Kohli. He played an astonishing knock of 82 runs to put the Indian team to (in) a commanding position.

All-rounder Hardik Pandya, who was promoted up the order, played an entertaining knock of 48 runs off just 27 balls that included four boundaries and three huge sixes. Other than him, wicket-keeper batsman MS Dhoni once again proved why he is considered to be the best finisher the game has ever produced. His 27 runs off 14 balls gave the finishing touch to the Indian innings that helped Indian team to reach 352 runs in their 50 overs.

Reacting to the total, Australian openers David Warner and Aaron Finch gave the team a steady start. The duo added 61 runs for the first wicket before the skipper Aaron Finch felt short of the crease. Steve Smith then joined the left-handed batsman, David Warner to take the team total to 133 runs although David Warner reached his half-century but couldn’t capitalize it and chipped the ball in the air at the score of 56 runs.

Besides him, Steve Smith played a handy knock (69 runs), but like Warner, he also wasn’t able to convert the half century to century. Australia lost three quick wickets for only six runs that shifted the momentum entirely in favor of India. In the end, young Alex Carey smashed some quick boundaries to keep the hopes alive for the team. In the end, Bhuvneshwar Kumar and Jasprit Bumrah bowled at good lengths to stop the Australian team to 316 runs in their 50 overs.

Indian left-handed opener Shikhar Dhawan bagged the ‘Man of the Match’ award for his brilliant century (117 runs off 109 balls).