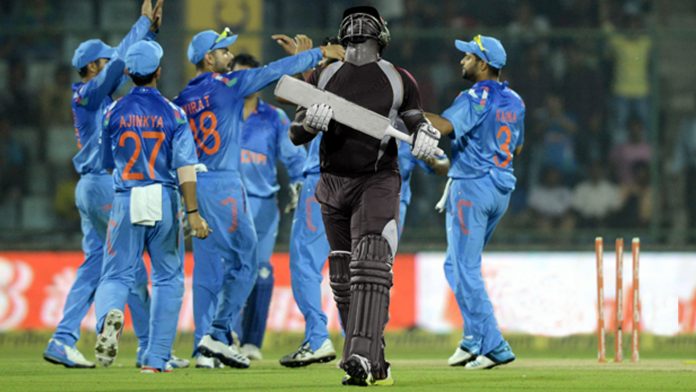 The last and final game of the 5-match-ODI series between India and West Indies was won by the men in blue, who beat the Caribbean Giants by a mammoth difference of 9 wickets. The match held at the Greenfield International Stadium situated in Thiruvananthapuram saw the Indian cricket team clinching the series by 3-1.

The match started with West Indies winning the toss and opening to bat first as to try their luck; however, the trick didn’t seem to work well for the team. The Windies team was shot out with a total of 105 runs, the lowest of the team till date.

The game had been a tale of falling wickets for the West Indies team and creating records for the Indian players. West Indies lost their starting 2 wickets in the first two overs where both the players were out for a duck. Crucial players like Captain Jason Holder and Marlon Samuels failed to create magic with their bat to safeguard their team from getting knocked out.

On the other hand, India’s innings was a delight to watch for Indian cricket fans as they saw Ravindra Jadeja hauling 4 wickets conceding 33 runs whereas Jasprit Bumrah & Khaleel Ahmed settled with 2 wickets each. Talking about the batting line-up of the team, India’s Captain Virat Kohli and Rohit Sharma, as usual, took everyone by awe with their spectacular shots. Rohit Sharma scored a total of 63 runs off  56 balls & Kohli managed to score 33 runs off 29 balls, both remaining unbeaten throughout the game.

The Indian cricket team chased the 105 runs target like it was a cakewalk for the players, defeating West Indies by 9 wickets the team managed to get away with series bagging a 3-1 victory.

This is the 6th trophy that India has won under Virat Kohli’s captaincy. It seems that the player is a good replacement as a captain for the legendary keeper-batsman MS Dhoni and can lead team India to bag plenty more titles.

Let’s see if Virat Kohli as a captain can help team India repeat the history by once again winning the World Cup Championship, slated to happen in the coming year. Till then keep watching this space for more cricket, football & kabaddi feed.