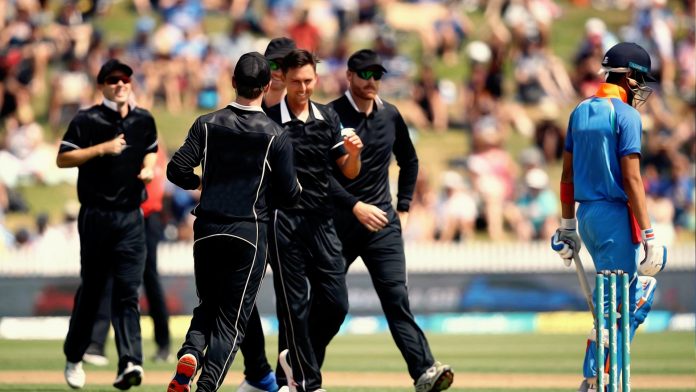 The game started with New Zealand batting first after India won the toss and opted to bowl. Well, India’s technique of chasing the score failed miserably as they couldn’t manage with the given 213 runs target & were only able to score only 208 runs with a loss of 6 wickets.

The pitch that worked well for the batsmen seemed to be against the Indian players as Indian batsmen failed to create magic with their bat on the same pitch where New Zealand player Colin Munro scored a whopping 72 off 40 balls. Munro’s contribution helped New Zealand achieve a big score of 212 runs.

On the other hand, India kept on receiving shocks one after the other as the top-notch players kept on making their way back to the pavilion with relatively low scores. The first shock came when Indian opener, Shikhar Dhawan was dismissed in the first over itself by Mitchell Santner. However, the Vijay Shankar and Rohit Sharma duo managed to chip-in 75 runs before Shankar was dismissed by Santner.

The dismissal of two of the prominent players of team India, Rohit Sharma, and Rishabh Pant, came as another devastating event for the visitors, who then lost all the hopes of winning the game. Before packing things, Shankar scored a big total of 43 runs in just 28 balls with 5 boundaries & 2 sixes. Rohit, on the contrary, scored 38 runs off 32 balls before getting out, offering an easy outside edge, in the hope of scoring a big total.

Colin Munro was labeled as the Man of the Match for his terrific performance whereas Tim Seifert was adjudged as the Player of the series.

We’ll keep on updating you with the latest happenings of the sports, if you want to know what is going on in the sports world then stay tuned to MyTeam11.