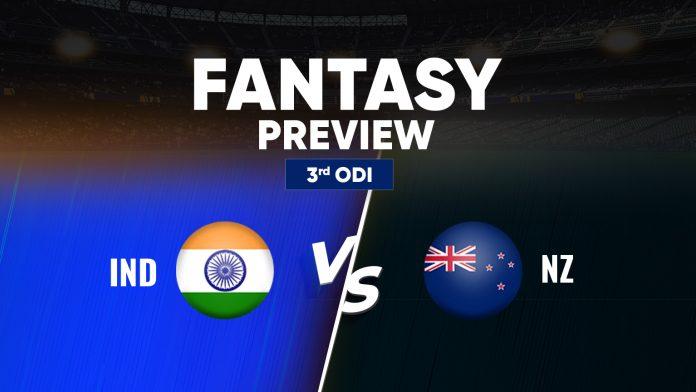 A confident Indian team will face an unassured Kiwi side in the 3rd and final ODI of the bilateral series. India has their sights on the top spot of the ODI rankings and a win would be enough for Men in Blue to claim that spot. The match will be played at the Holkar Stadium, Indore on 24th January. So, let’s dive into the preview to look at all the relevant stats and fantasy picks for the upcoming match.

The team is currently firing on all three cylinders and comfortably crushed the Kiwis by 8 wickets in the 2nd ODI. The openers are in top form while Kohli looks like his old self, Men in Blue finally look like a stable batting order. In this series, Indian pacers Siraj and Shami have been a revelation while K. Yadav seems to have his confidence back. J&K-born pacer U. Malik can replace S. Thakur for the final ODI.

The Kiwis had a brilliant start to their subcontinent tour as they defeated Pakistan 2-1 in the ODI series. However, things haven’t been great since then as their batting order has wholly failed in front of the Indian bowlers. Skipper Latham would be disappointed after his team got displaced from the top spot in the ODI rankings but would want them to save their pride in the 3rd ODI. The Black Caps are expected to name an unchanged lineup for the 3rd ODI.

India and New Zealand will face each other in the 3rd and final ODI of the series on 24th January at 1:30 PM IST. The lineups of the match will be available at 1:00 PM on the MyTeam11 app.

One of the primary cricket venues in Madhya Pradesh, the 30,000-seater Holkar Stadium will host the final ODI between India and New Zealand. The ground was also the setting for Team India’s highest ODI total of 418 runs in 2011 against West Indies.

The pitch at Holkar Stadium is one of the liveliest in the country. Pacers like Siraj and Ferguson can take advantage of the bouncy tracks and cause trouble to batsmen throughout the innings. However, with an average 1st innings score of 307, batters can also score runs if they bide their time.

R. Sharma: Indian skipper has scored 225 runs in the last 5 One-Day matches on home soil. Sharma has got good starts, scored a couple of half-centuries but failed to reach the 3-figure mark. The pitch of Holkar Stadium would suit him and we might witness his first century of the calendar year.

M. Bracewell: The Kiwi all-rounder has been a revelation with the bat in this series. Bracewell has scored 162 runs in 2 matches including a brilliant knock of 140 in the first ODI. He would love to bat at the Holkar Stadium and get a few more runs under his belt.

Here are the probable XIs for the 3rd ODI between India and New Zealand.

It’s time to join in on the thrilling cricket action on MyTeam11. Create your fantasy teams for the 3rd ODI between India and New Zealand and have a chance to win cash prizes. Additionally, by taking advantage of the Refer & Earn campaign on the MyTeam11 app, you can earn rewards such as iPhone 14, iPad and a Samsung Smart Watch. Don’t miss out on this opportunity to win big!