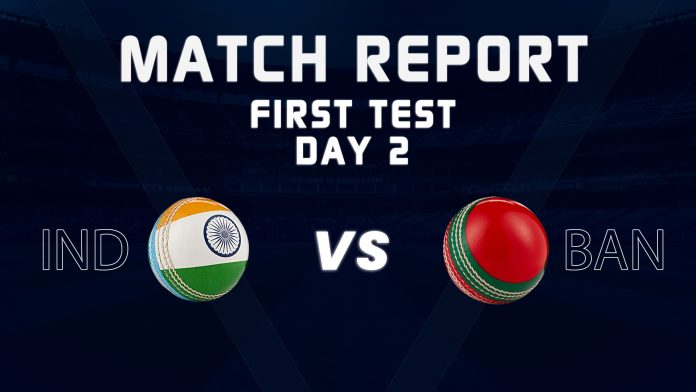 After Bangladesh bundled out on a total of 150 runs on the first day of the first Test in Indore, the Men in Blue took charge of getting most out the situation. India started their day at 86/1, with Mayank Agarwal and Cheteshwar Pujara on the crease.

Rohit Sharma became the first player wo=ho fell prey to Bangladesh bowling attack at the end of Day 1, with a mere total of 6. It was Mayank and Pujara who took the innings forward on Day 2 before the latter was caught by Saif Hassan on a ball by Abu Jayed towards the end of the 29th over. Pujara walked back to the pavilion with a score of 54 off 72 balls which included nine boundaries.

The next to walk down the field was team India’s captain Virat Kohli, who didn’t seem to have luck in his favour today as he was booked by Abu Jayed on the second ball he faced. It was Rahane and Agarwal who put up a strong partnership of 190 runs, laying the foundations India’s strong lead in the game. Rahane scored a whopping 86 off 172 balls before he caught by Taijul Islam in the 85th over.

It was a good day for Abu Jayed as he managed to pick 3 major wickets of Kohli, Rahane and Pujara. Other bowlers from Bangladesh failed to do magic on the field as the hosts dominated the game with their action-packed batting.

Mayank Agarwal outshined as the ultimate star of the game as he slammed his second test double century. He smashed 243 runs off 330 before Mehidy Hasan succeeded in picking up his wicket in the 107 over. His heroic inning included 28 boundaries and 8 sixes.

At the end of Day 2 stumps, the hosts were 493 at a loss 6 wickets with Ravindra Jadeja and Umesh Yadav on the crease. India is leading the first test by 343 runs and shall look forward to continuing their dominance on Day 3 too. Bangladesh, on the other hand, would be looking forward to restricting India at the least possible score, so that they can easily accomplish the target.