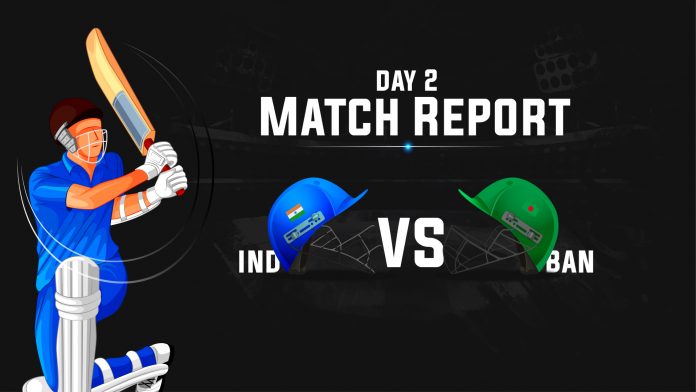 Mushfiqur’s gutsy knock on Day 2 helped Bangladesh to force the match in the third day as they end the second day at 152/6 and trail India by 89 runs. Mushfiqur Rahim remains unbeaten on 59. Ishant Sharma was the pick of the bowlers with four wickets. Earlier India declared their first innings at 347/9 with a significant lead of 241 runs. Virat Kohli was once again the star of the show for the hosts as he slammed his 27th Test century. Rahane and Pujara were too among the runs as both scored half-centuries.

Another Masterclass from King Kohli

Eden Garden’s crowd witnessed a Kohli masterclass on the morning of Day 2. Virat Kohli scored his 27th Test century as he became the first Indian to score a century in a pink-ball Test. Virat Kohli got to the three-figure mark in 159 balls and had hit 12 boundaries in a well-paced innings at the Eden Gardens. Kohli with his 20th century as captain also surpassed Ricky Ponting to grab 2nd place in the list of captains with the most Test hundreds. Kohli now has 20 hundred as captain while former South Africa captain Graeme Smith leads the troop with 25 tons.

Virat Kohli also went past Steve Smith on the list of batsmen with most hundreds in Test cricket. Kohli is now at the 17th spot alongside South Africa's Graeme Smith and Australia's Allan Border who also have 27 Test hundreds.

Ishant’s love for the pink ball

After causing havoc in the first innings, Ishant ruled the roost once again as he racked up four wickets in the second innings on day 2. Ishant bowled with a lot of fire and decimated Bangladesh’s batting once again. The quickster has now taken nine wickets in the match and would be eyeing his second 10-wicket haul in Test cricket on day 3.

Mushfiqur Rahim was the lone warrior as he stood up against a rampaging attack with an unbeaten counter-attacking fifty. The match would have been over on day 2 itself, but Rahim along with Mahmudullah gave some relief and sense of respect to the dressing room. Mahmudullah’s innings was cut short by a hamstring injury, but Rahim kept scoring at a brisk pace. He would be looking to make India bat again on day 3.

The historic pink test became a forgettable Test for Mominul Haque as the skipper bagged a pair in the second Test. After getting caught in the first innings, Mominul was again at the receiving end as he got undone by Ishant’s outswinger. Apart from 37 in the first innings in Indore, Mominul struggled in this series and would want to erase this Test match from his memories.