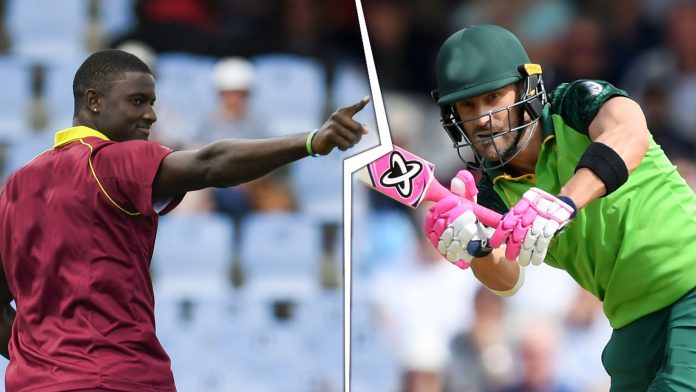 The 2019 World Cup Campaign for Windies started with a huge win over Pakistan. The Caribbean team defeated Pakistan by seven wickets. In the second match played against Australia, the team came close to victory, but at the end lost the game by 15 runs.

On the other hand, South Africa still hasn’t registered a victory in this tournament. Faf du Plessis led the South African team has lost all the three matches they have played yet.

The pitch is expected to be good for batting. Reports are suggesting that the track will be surrounded by little grass. So, the initial few overs will be crucial as the ball will get some movement. Once the batsmen get settled, then run scoring will become easy.

The weather is expected to be favorable on Sunday, with the possibility of rainfall in patches. With a cloud covering of 37%, the humidity will be around 65%. The day time temperature will hover about 16 degrees Celsius.

Rassie van der Dussen, who has a groin injury, may be dropped. In place of him, Aiden Markram will most probably get into the eleven. There’s no update on Lungi Ngidi’s injury, and he may have to warm the bench yet again. Hashim Amla’s poor performance is also a point of concern. So, he will be eyeing to get some runs. Other than this, no other replacements are expected.

The Windies squad might not do any changes in their playing XI even after a close defeat in the last game against Australia. Almost every batsman in the team looked in great touch; now they will be looking to utilize their form to take the team to victory.

Both teams’ total score against each other in the World Cup

Let’s see what happens in this exciting face off. Whether South Africa will end their losing streak or West Indies will defeat them to get the second victory of the season.