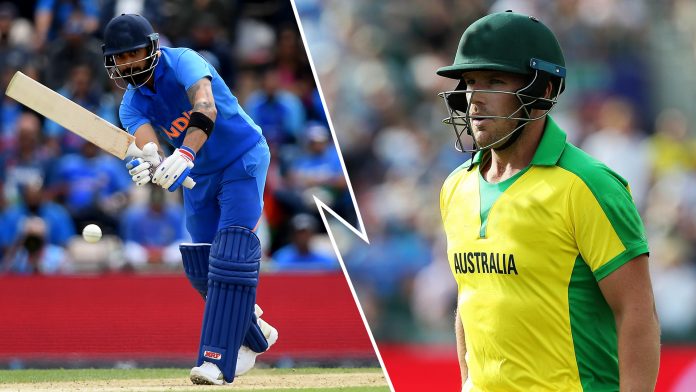 In the only match played against South Africa in this tournament yet, Indian team emerged victorious in the game. On the other hand, the Australian team has also started its World Cup campaign in style. Aussies defeated Afghanistan with ease followed by a close victory against West Indies.

The rivalry between India and Australia has been very special over the years and this match will be a big challenge for both the team.

In recent times, the Oval track has witnessed some high scoring games and the same is expected for this match as well. The pitch at Oval is usually flat, but has been on the slower side during this tournament than usual. Bowlers will get some movement and bounce.

The team winning the toss will look forward to setting up the runs on the board because in the matches played at this venue in this tournament yet have, the team batting first have emerged victorious.

There has been constant rainfall in London from past few days, but the weather is expected to be favorable on Sunday, with the possibility of rainfall in patches. With the cloud covering 37%, the humidity will be around 58%. The day time temperature will hover around 20 degrees Celsius.

The Indian team played well against South Africa. Jasprit Bumrah and Yuzvendra Chahal bowled brilliantly in the match and managed to restrict South Africa below-par score. In the batting department, Rohit Sharma crossed the century mark to take the team to a comfortable win.

Talking about the team combination for this match, no changes are expected. Shikhar Dhawan, and KL Rahul will be geared up to score big runs.

No injury concerns are revolving around the team, so the same team is anticipated to enter the field this time also.

Australia and India have faced each other 11 times in ICC Cricket World Cup in which Australia has won 8, whereas India has bagged the winner’s title on 3 occasions.

Both teams’ total score against each other in World Cup

Both the teams are in excellent form right now. India had a very successful tour of Australia, where it created history and won every single format it played in. In response, the Australian team came to India and won the bilateral One Day Series to return the favor. Let’s see what happens when these two teams will meet in London on 9th June 2019.