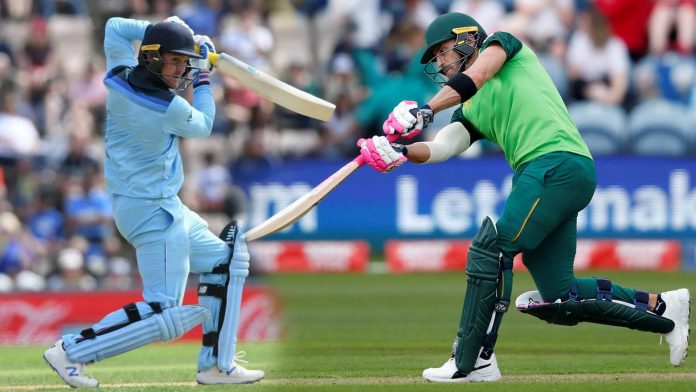 The opening match of the ICC Cricket World Cup that will be played between England and South Africa will start at 3:00 PM IST.

Both the teams will be aiming to start their World Cup campaign with grand win. England team, which is considered as one of the favorite teams to lift the prestigious cup, will look forward to continue with the same performance as they did in the bilateral series against Pakistan. However, South African team will keep their heads high and will display their best performance on the field.

The track favors the batsmen as ball will come nicely on the bat. Besides this, fast Bowlers will swing in the initial overs of the innings. The new ball will move so smoothly that can put the batsmen into dilemma. Once the batsman will spend time, the run scoring will become simpler. The captain winning the toss will keep an eye on chasing the target as bowlers will merely get any help in the second half of the match.

According to reports, there is a possibility of rain. The temperature will be around 23 degrees Celsius and humidity will be above 60s. For the entire match, a cloud cover will be there with no possibility of sunshine.

Skipper, Eoin Morgan, and fast bowler, Mark Wood, have been declared fit ahead of the match against South Africa. Apart from them, no injury concerns were there in the warm-up matches. So, all the 15 players will be available for the final 11 selections.

South Africa pacer, Dale Steyn, will miss the opening match, as he has been already ruled out following his shoulder pain, which is a huge blow for the team. Other than Dale, rest of the players are fit and available for selection.

With the availability of some star players in both the squads, who can turn the match at any point in time, both the teams will be hoping for a memorable start. Let’s see what will happen!

Till then, follow MyTeam11 for more updates and information about the upcoming World Cup fixtures and latest happenings.

Share
Facebook
Twitter
Previous articleFour players who failed to lift the World Cup Trophy
Next articleWorld Cup 1999: Nothing could stop the Master Blaster; Not Even Father’s Demise