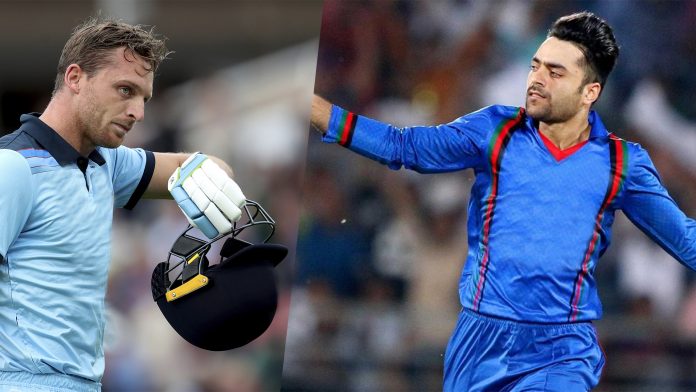 The tournament favorite, England has won three out of four matches it has played yet. While, on the other side, the Afghanistan team has failed to emerge victorious in all the games they have played till now.

The pitch at Old Trafford helped the spinners in the previous match, so the presence of some quality spinners in both the teams will make this battle even more exciting. Apart from this, the batsmen will get advantage from the track once settled.

Both the teams may prefer to bat first with the possibility of rain interruptions and DLS method in the game.

In the last few weeks, Manchester weather has been cloudy, and the same is expected in this match too. Probability of rain interruptions is very high. Reports suggest that the temperature will hover around 19 °c and humidity will be approximately at 70%.

Although after registering a comfortable victory against Windies, injury scare is revolving around the team. Jason Roy didn’t come to bat in that match due to a hamstring strain, so his chances to play this match is very less. The England team might also miss the services of skipper Eoin Morgan who suffered a back spasm in the previous game. James Vince and Moeen Ali will be the best replacement for them if they both miss the game.

No injury concerns are revolving around the Afghanistan team. Even after the defeat in the last match, the team management might not do any alterations in the playing XI.

Teams like South Africa, Pakistan, and maybe even Bangladesh will be supporting Afghanistan to slip up somewhere and create an opportunity for them among the top 4. But, on the other hand, it’s England, one of the most consistent teams of the tournament.

Let’s see what happens in this battle between the top-ranked and the bottom-ranked team of the World Cup 2019.

Till then, Follow MyTeam11 for more updates and information about the upcoming fixtures and latest Sports stuff.