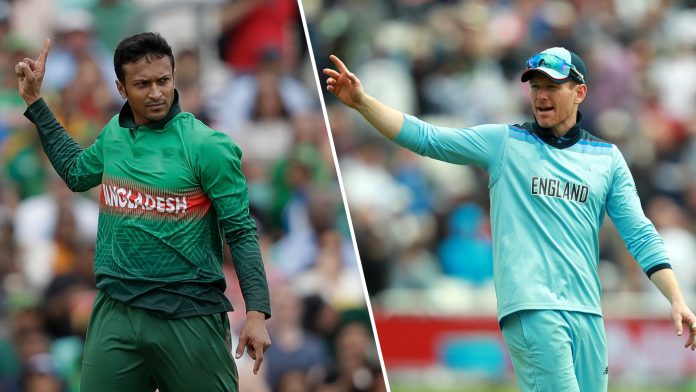 Bangladesh has knocked out England in the 2015 World Cup. So, if England thinks that this match is going to be one-sided, then it is going to be a big mistake. In this tournament, the number one ranked team has won its first match against mighty South Africa quite comprehensively, but lost to Pakistan in their second game of the competition.

On the other hand, Bangladeshi tigers surprised them after registering an impressive win against South Africa in the opening match. Although Bangladesh lost their second match against the blackcaps, they showed a tough fight in the game.

The Sophia Gardens track is expected to have good help for fast bowlers. Due to the presence of green grass, fast bowlers will get extra bounce and movement which can deceive the batsman. A score of above 280 is on the cards.

Captain winning the toss will look to field first, expecting his bowlers to take advantage and stop the opposing team to a low total.

Reports are coming from England that there is a possibility of 47 percent of cloud covering with rain to come in bits and pieces. The humidity will be on the higher side above 75 percent, and temperature will linger around 14 degrees Celsius.

The home team bowled well in patches in the last game against Pakistan which they however, lost. The main reason for their defeat was poor fielding performance. England team‘s biggest strength is their batting, and in both the matches they have done well. The likes of Jos Buttler, Eoin Morgan, and Joe Root have performed well. But Jonny Bairstow and Jason Roy have yet not implemented for what they are known for. So, now they need to step up and show the skills and capabilities they possess.

Talking about the team combination, no changes are expected for the match.

For Bangladesh, all-rounder Shakib Al Hasan looked impressive with both bat and ball in both the matches, the team has played. Other than him, Mushfiqur Rahim scored a half-century in both the games. The likes of Tamim Iqbal, Soumya Sarkar, needs to convert their starts to big scores.

Talking about their team combination, no changes are expected in their playing XI for the match.

Bangladesh and England have faced each other three times in the ICC World Cup in which Bangladesh has emerged victorious two times while England has won on one occasion.

Both teams total against each other in World Cup

Bangladesh looked good in both the matches they have played and has the potential to shock more teams. Let’s see what happens when these two teams face each other whether Bangladesh will beat England, or the Englishmen will dominate to get their second victory of the tournament.