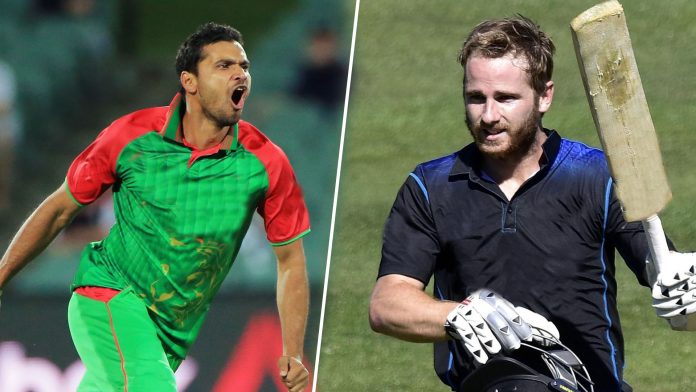 Bangladesh all-rounder Shakib Al Hasan will be playing his 200th one-day match. To make the day more memorable he’ll be eyeing to showcase brilliant performance to make his team win second consecutive match in the World Cup. On the other hand, New Zealand will once again be eyeing to give a clinical performance to become the first to get second victory of the tournament.

The Oval track is considered suitable for batting. Like other England grounds, there will be swinging conditions where the new ball will move in both the innings. Spinners will merely get any help from the pitch. Skipper winning the toss will wish to bat first and put runs on the board something Bangladesh did in their last match against the Proteas.

The reports suggest over 90 percent of cloud cover throughout the day. There’s enormous possibility that rain can despair the fans. The temperature will be between 17 and 20 degrees Celsius. The humidity will also be on the lower side between the mid-40s.

After the dream start against mighty South Africa, Bangladeshi tigers will be thinking to do no changes to their winning combination. The duo, Shakib Al Hasan and Mushfiqur Rahim’s confidence will be high after their performance in the first match. Apart from them all the players stood up and gave their 100 percent on the field. The team will be eyeing to repeat the same performance.

The blackcaps are also unlikely to make any changes to their team after their ten wicket victory against the Lankan lions. No other batsman apart from Colin Munro and Martin Guptill, got the chance to express themselves in the first match. So, all the batsmen will be looking forward to showcase their skills in this match. The skipper will be expecting the bowlers to repeat the performance of the last game.

Player to look for:

Earlier this year in the bilateral series, the Kiwis defeated Bangladesh by 3-0. Let’s look at what happens in this match, whether Bangladesh will take their revenge and beat the blackcaps for the first time in the World Cup or New Zealand will once again outplay them.