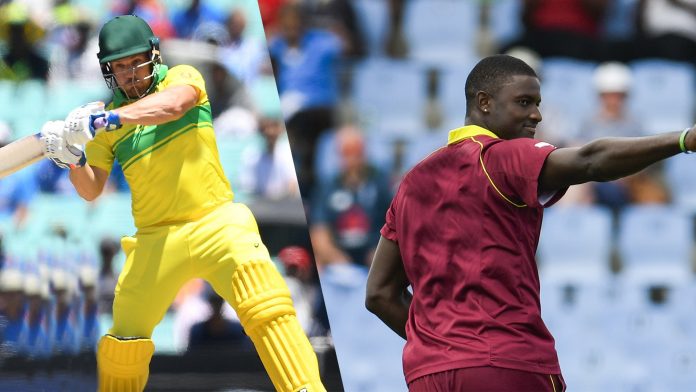 The Windies team shattered the Pakistani side in their opening encounter of the tournament while the Aussies registered a comfortable victory against Afghanistan in their first match. The contest between these two teams is one of the most awaited battles because both the sides have showcased some brilliant performances recently and have been strengthened due to the return of some star players.

Reports are saying that the pitch is expected to have something in for the bowlers as the conditions will be cloudy. Medium pacers will get swing due to the breeze there.

Captain winning the toss will want to bat second because as per records, teams chasing the target got more success at Trent Bridge.

Moderate or heavy rain is in prediction. The maximum temperature will be going reach 17 degrees Celsius which will dip as the day progresses on. Nearly 74 percent of cloud covering will be there, and the humidity will linger around 78 percent.

Australian team management might include Nathan Lyon in the squad in place of Nathan Coulter-Nile. Nathan Lyon has a brilliant record against left-handers, and the West Indies team is packed with left-handers. Other than this, no changes are expected in the playing XI.

West Indies might enter the field with the same playing XI that they played against Pakistan. Like the previous match, the team might go with only three proper bowlers and three all-rounders to strengthen their batting line up.

Both the teams have a power-packed batting line-up having capability to change the gears any time and shift the momentum. So, this will be an exciting battle to watch. Let’s see which team’s batsmen will roar at the occasion.