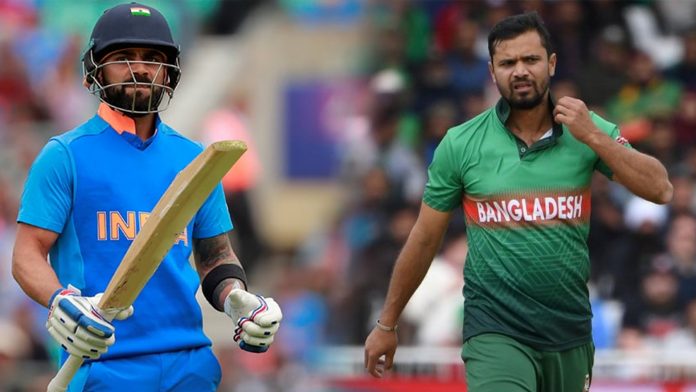 Bangladesh vs. India is not the match for which fans will be eagerly waiting for. In the previous World Cup encounters India have been the dominant side whenever both teams took against each other. But, this time the way Mashrafe Mortaza troops have showcased some exceptional performances and disappointed even the best team of the tournament. So, the Indian team will be taking this game seriously.

India lost to hosts, England at the same venue in their last match. The stats suggest that the pitch at Edgbaston is mostly bowling friendly like in Pakistan-New Zealand match where spinners got good help. But, if we look at the last game here, the bowlers merely got any help from the pitch. The team batting first has always had an advantage with them. So, the team winning the toss should look to bat first and defend the total.

The Weather forecast for this World Cup game is predicted to be sunny with a moderate breeze and partly cloudy. But the most important thing is that rain won't be a spoiler play in the match as there are less than 15% chances of rain. Moreover, the temperature will be near about 18 degrees Celsius, and humidity will hover around 71%.

With three wins in seven matches, Bangladeshi team is at the sixth spot in the points table. The Bangla tigers have impressed the entire Cricket Fraternity in this tournament. The team will be eyeing to showcase their top performance in their last two league stage match to give them a chance to qualify for semi-finals.

Bangladesh is likely to play with the same playing XI that played against Afghanistan in the last match. Once again the responsibility will be on experienced players like Shakib al Hasan and Mushfiqur Rahim. Besides them, all the other team members need to understand their role and perform accordingly in a must-win game.

India’s winning streak in the World Cup 2019 has come to an end after their defeat against England in the last match. With five wins in seven games, the Indian team is currently at the second spot in the points table, and one more victory will confirm their semi-finals place.

After the defeat against England in the last match, all-rounder Ravindra Jadeja might replace Kedar Jadhav whose performance in this World Cup has not been up to the mark. Other than this, Virat Kohli is expected to do no changes in the squad.

All the eyes will be on Lokesh Rahul who failed to perform as an opener. In this match, he will be under tremendous pressure as one more lousy performance will show him the exit gate.

To qualify for top fours, Bangladesh needs to win both their left games and hope for a good outcome from New Zealand’s vs. England match. On the other hand, Virat Kohli and Co. only need one win in two left matches to get the Playoffs ticket.

Follow MyTeam11 for more updates and information about the upcoming fixtures and the latest Sports stuff.