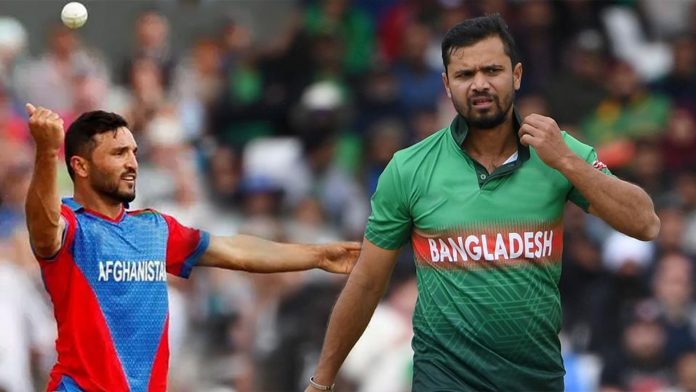 Now it’s the battle between one team that has not lived up to the expectations and the one that has played some exceptional cricket and stunned the best teams of the tournament.

The Southampton track is expected to have a good advantage for bowlers. The last game played here was sluggish, and the spinners had an upper hand. But due to overcast weather in this match, the pacers may get more assistance. In all the games at this venue, the pitch got better in the second half.

According to reports, the weather for this game doesn’t look good with the chances of interruption throughout the day. The temperature will hover around 20 degrees Celsius. The humidity will be on the higher side, approximately about 67 percent.

The team winning the toss will look forward to field first and chase the total.

Placed sixth on the table with two victories in six matches, Mashrafe Mortaza and company will have to win all their matches now to get into semi-finals. Even as their batting has been exceptional, it’s their bowlers, who have let the team down in a few games. So, now the bowlers have to take responsibility on their shoulders.

Mosaddek Hossain, who missed the last match due to an injury is now available. So the team is expected to bring him back in place of Sabbir Rahman who got a golden duck versus the Aussies. There’s no update on Mohammad Saifuddin’s back spasm till now. So, his inclusion in the team is still not sure.

Having lost all their six matches of the 2019 World Cup, Afghanistan is already out of semi-finals race. In their last three games left, Gulbadin Naib and his troops have nothing to lose for, so, they will now enjoy and play for their respect.

However, thier last game against India at the Rose Bowl in Southampton, the Afghans have showcased brilliant performance. Although, the team lost the match by 11 runs but gathered a lot of praises from the Cricket Fraternity.

Afghanistan is at last spot in the points table with no victories till now.

After their promising performance against India, Afghanistan team is expected to do no alterations in their playing XI. They might play with the same playing XI that played in the last match.

Afghanistan squad has nothing to lose now, they are already out of semi-finals race, but on the other hand, Bangladesh still has a good chance to qualify for knockout stages. Let’s see what happens.