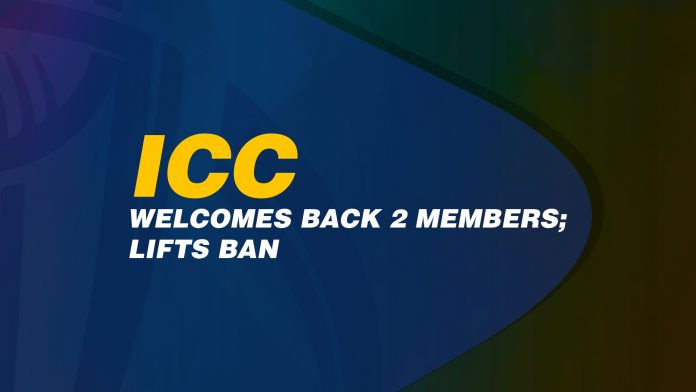 Zimbabwe and Nepal have been recalled by highest cricketing authority, ICC after a meeting in Dubai on Monday. Zimbabwe was suspended three months back with immediate effect due to political interference. While Nepal was suspended in 2016 for breach of ICC regulations that prohibit government interference while also requiring 'free and fair elections'.

“Zimbabwe and Nepal have been readmitted as ICC Members following the conclusion of the ICC Board meetings in Dubai today,” said ICC.

After the ban was enforced, Zimbabwe cricket stopped getting funds from ICC and was made ineligible to participate in global events. But their readmission means that now that they will receive all the facilities.

“Zimbabwe was readmitted by the ICC Board following a meeting with the ICC Chairman and Chief Executive, Zimbabwe Cricket Chairman Tavengwa Mukuhlani and Zimbabwe Sports Minister Kirsty Coventry and Gerald Mlotshwa, the Chairman of the Sports and Recreation Commission. They had been suspended in July 2019 following government interference in the running of the Board,” added ICC.

“I would like to thank the Zimbabwe Sports Minister for her commitment to the reinstatement of Zimbabwe Cricket. Her desire to work in support of Zimbabwe Cricket was clear, and she has unconditionally complied with the conditions set down by the ICC Board. Funding to Zimbabwe Cricket will continue to be on a controlled basis as part of a collective effort behind getting the game in Zimbabwe back on an even keel,” said Manohar.

Nepal has been reinstated on a conditional basis, the country’s cricket association held a committee earlier this month which was about the re-admission of Nepal board.

The ICC chairman said, “Given the progress made in Nepal, a transition plan will now be developed for the Cricket Association of Nepal to support full compliance with Associate Membership criteria, which will also involve controlled funding.”