ICC suspends four UAE cricketers for violation of its code 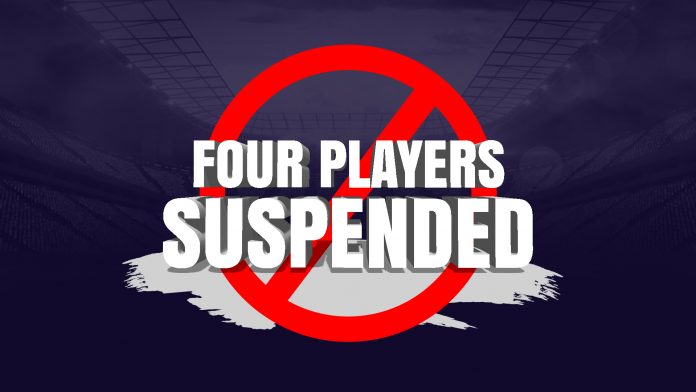 After the suspension, UAE captain Mohammad Naveed was withdrawn from the Emirates squad without any explanation on October 10. Top-order batsman Shaiman Anwar and pacer Qadeer Ahmed along with local player Mehardeep Chhayakar were the other three players. The exclusion of the UAE’s trio from the team can prove to be big loss for the team in World Cup qualifiers.

As a replacement, the Emirates team management had called up three players in the likes of Junaid Siddique, Waheed Ahmed and Darius D’Silva. Junaid Siddhique and Waheed Ahmed were named in the squad as medium pacers while D’Silva had been included as the batsman for the warm-up games.

ALSO READ: THERE IS NO CERTAINTY YET THAT ASHWIN WILL BE KXIP CAPTAIN IN IPL 2020 – KUMBLE

Mohammad Naveed has been charged with two breaches, Shaiman Anwar Butt is also found violation two breaches. Qadeer Ahmed Khan is charged with six breaches of code of conduct as he concealed the information about the already concluding series that happened this year.

According to media reports, the first two players Naveed and Anwar were found guilty in executing the plan created by India based bookie. It is believed that these players could have earned approximately a whopping $272,000 had they succeeded in executing that plan.

While the fourth player, Mehardeep Chhayakar was found violating one breach i.e. failing or refusing to cooperate with an investigation being carried out by the ACU in relation to possible Corrupt Conduct under the Code. These four players have been given 14 days to respond to the charges.

Share
Facebook
Twitter
Previous articleThere is no certainty yet that Ashwin will be KXIP captain in IPL 2020: Kumble
Next articleInd vs SA: 3 Potential winners for Man of the Series Title