“I am pretty good at taking responsibilities,” says Deepak Chahar ahead of T20 series 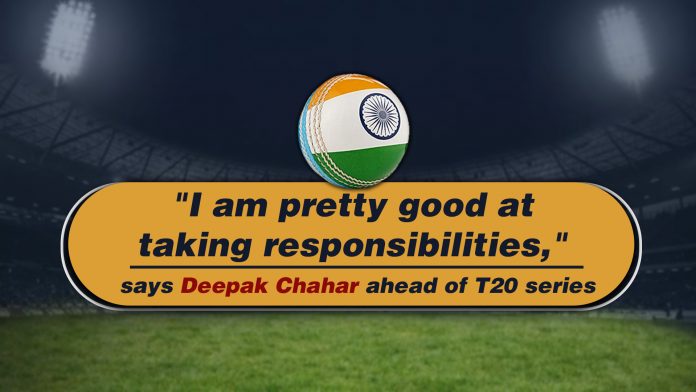 The Indian team is all set to play their first home series after semi-final exit in the ICC World Cup 2019 in England and Wales. The series against South Africa will witness three T20 Internationals followed by as many Tests. For the shortest format of the game, the Board of Control for Cricket in India (BCCI) has named few young guns who have performed considerably well in the Indian Premier League (IPL).

Deepak Chahar and Rahul Chahar are two good examples – who have shown that if an individual blends dedication and grit, he will certainly achieve what he desires for. In an interview with a media house, Deepak Chahar opened up about his journey, Dhoni's role, and his future with Indian cricket.

Asking about his 8-10 years of struggle before making it to the biggest stage, Deepak Chahar said, "Yes, things got prolonged because of injuries and the state cricket association was in the doldrums. Also, given the fact that Rajasthan boasts of a good pace attack, it resulted in stiff competition. That also played a role in making me work hard."

"The most frustrating part was staying away from cricket because of jaundice and thumb injury that resulted in missing out on three-four domestic seasons. I have been unlucky. Before IPL 2016, Pune Supergiants picked me up after Stephen Fleming saw me bat during selection games. But as destiny had it, I suffered a hamstring during practice matches and had to sit out."

He further spoke about the turning point in his life and gave MS Dhoni all dew credits. He said, "The turning point was when Mahi bhai first saw me during Supergiants' practice matches in 2016 where he was impressed with my batting. Later when he saw me bowl in the nets, I succeeded in leaving an impression. He was the captain of the team and wanted to make me play, but injuries marred that chance and next year it was Steve Smith who led the side and as he was promoting other players, I did not get much opportunity."

In the absence of Jasprit Bumrah, Bhuvneshwar Kumar – he will be India's strike bowler. On this the young gun said, "Pressure isn't there. I like taking responsibilities and I have done that playing for CSK where I was spearheading the attack and also bowled in the powerplays. I will say, I am pretty good at that."