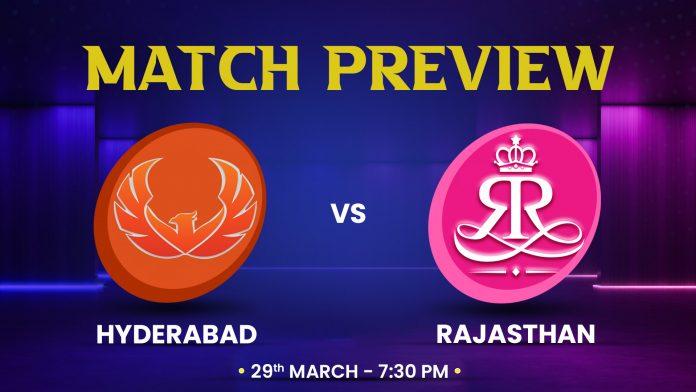 Hyderabad and Rajasthan will face off in the fifth edition of the Indian T20 tournament. Both teams have one championship under their belts and will be vying for a second this season. Last season, these two clubs had a terrible season, finishing in the bottom two spots on the points table. Both teams played 14 games, with Rajasthan winning five and Hyderabad winning three.

This season, Kane Williamson and Abhishek Sharma are expected to start for Hyderabad. Expect Abhishek to attack from the first ball with Williamson as the anchor. With Nicholas Pooran and Aiden Markram in the mix, the squad boasts a high-intent middle order. Keep an eye out for Abdul Samad.

The bowling appears to be a little shaky. Bhuvneshwar Kumar would have to elevate his game in order to help T Natarajan and Umran Malik. Romario Shepherd, a fast bowling all-rounder, might be a viable alternative for Hyderabad.

With batsmen like Jos Buttler, Sanju Samson, and Shimron Hetmyer, Rajasthan possesses a strong top-five. Riyan Parag is likely to be assigned to the finishing responsibilities because the lower order isn't very trustworthy.

R Ashwin and Yuvendra Chahal, Rajasthan's spin combo, are ideal for the Pune conditions. With the new ball, Trent Boult will be vital.

The Maharashtra Cricket Association Stadium's surface initially favours batsmen, but as the game develops, it favours spinners. At MCA Stadium in Pune, the chasing team enjoys an advantage on the wickets. The size of the barrier is around 80-85 metres.

Hyderabad's Nicholas Pooran is a left-handed wicketkeeper-batsman. He has scored 606 runs in 33 IPL matches so far, and he has the potential to repeat his success this season.

Kane Williamson, the team's captain, is a right-handed batter from Hyderabad. He's amassed 1885 runs in 63 league outings so far, and he'll be trying to build on that start once again.

Hyderabad's Rahul Tripathi is a right-handed hitter. In his 62 outings thus far, he has amassed 1348 runs. With the bat, he'll be striving for another great season.

Sanju Samson, the team's captain, is a right-handed batter from Rajasthan. In his 121 outings thus far, he has scored 3068 runs. For this game, he'll be one of the top fantasy selections.

Rajasthan's Jos Buttler is a right-handed wicketkeeper-batsman. In his 65 outings, he has amassed a total of 1968 runs. With both the bat and the gloves, he hopes to add points.