How are Kabaddi Leagues Making the Indian Audience go Hu-Tu-Tu? 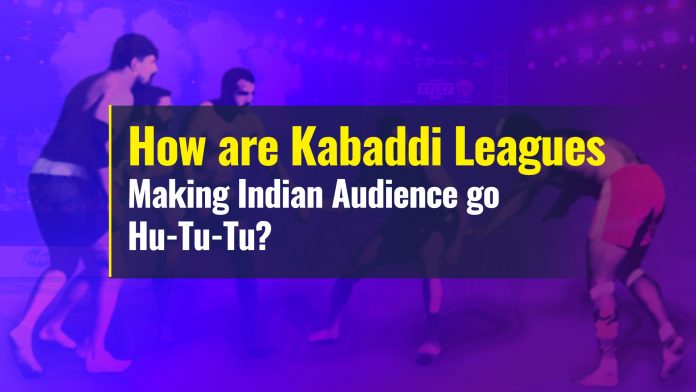 From being the game of Rural India, Kabaddi is now marching towards creating a space for itself among the urban Indians. From being recognized as a not-so-gentleman game, the sport is now surpassing football in terms of popularity. From listening to the crowd cheer Chauka, Chauka, to the players chanting Hu-tu-tu-tu, Kabaddi has managed to get on our taste buds.

With constant promotions from the investors, and acceptance from the fans, kabaddi is now the second most-viewed sport in India after cricket, leaving football way behind in the race. The increasing popularity levels surely highlight that the constant efforts and hard work have paid-off and no matter how modern we try to act, we Indian are still ‘Desi’ at the Heart. But the question that still stands strong is how the sport found its path from the villages of India to the big screens & gaming arenas of the study.

Cricket and Football, the two most popular sports among the Indian fans take too much time to complete. However, the average time to watch a game of Kabaddi is a fraction of the time required for completing an entire match of cricket or football. Kabaddi leagues provide a bucket-full of excitement and entertainment within a handful of time, keeping the audience engaged the entire time. Also, the pace of the game is quite fast where every 30 seconds a raid or a tackle can be seen happening that just makes the users stay glued to the game.

Promoting the No-Cost-Play Concept of Game

These kabaddi leagues are getting quite popular among the kids as well. Full of energy and always ready to pick a game & head out for the field, the only obstacles faced is the cost of playing. Both cricket and football come with a cost in terms of bat, ball, wickets, net, etc., which is becoming quite a tedious task for the not-so-financially sound. Meanwhile, kabaddi is a game that does not require any money expenditure and thus, is gaining huge popularity among the kids.

Also Read: Cristiano Ronaldo – Player Who Scripts His Own Manual

The investment for the kabaddi leagues is very high, where the broadcasting partners try spending luxuriously to the target audience in every corner of the country. Investing a huge amount on the promotions, the leagues are helping the game reach rural as well as urban population who are in turn developing a great interest in the game.

High-profile people, including Bollywood stars, sports personalities, and big business people are some of the owners associated with various kabaddi leagues. The inclusion of famous faces with such tournaments automatically works to lure users into the game. Following their favorite superstars on the television screens, people try to follow the game too.

Muskaan Sharma
Some say she gained her writing skills from Napolean Hill others say, Paulo Coelho. It's rumored that Chetan Bhagat consulted her for the novel "The girl in room 105." Some say she was born with a quill in her hand. She is often heard saying, "People who don't write are Zombies, they love eating brain but not utilizing it do something creative." Muskaan Sharma, pursuing her graduation but still a child at heart is associated with MyTeam11 as a content writer. She is a firm believer of Mishkka's saying, "If we don't tell our stories no one else will. If they do, it will be without us."
RELATED ARTICLES
Kabaddi