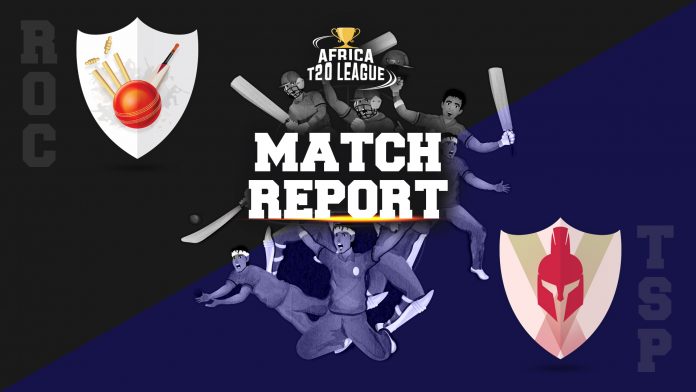 Paarl Rocks lifted their maiden Africa T20 League trophy after a convincing eight-wicket win over Tshwane Spartans on Monday. The home team chased 148 inside 15 overs and were on top of the Spartans from start to finish. Henry Davids was the star for Rocks as he helped his team to their first title triumph with the fastest fifty of this Africa T20 league. The Pneil boy smashed his fifty off just 22 balls. David hit 8 boundaries and four sixes in his blistering innings of 77 and chased down 148 with 5 overs to spare. it was Rocks' first victory over the Spartans in five matches across both editions of the tournament to date.

Earlier in the evening, the home side won the toss and chose to chase in a good batting pitch. South Africa's maestro, AB de Villiers, was in early after Tony de Zorzi was bowled by Isuru Udana. The former Proteas captain showed his intent in the first over itself. De Villiers along with Elgar continued to score quickly. De Villers who was dropped by Tabraiz Shamsi off his second ball, went on to make a crucial fifty. Shamsi, however, redeemed himself when he had Elgar caught at the cover after the dropped catch and later had Heinrich Klaasen caught at long-on to finish with figures of 2 for 29.

Kerwin Mungroo, however, was the star with the bowl. In the final, the man from Pietermaritzburg made a mark with a composed performance and kept the Spartans to a modest total. Mungroo was brilliant at the death and kept the brakes on a Spartans side who were going at just seven runs per over. Mungroo finished his brilliant spell with 1 for 21 to restrict Spartans to a chasable 148.

Henry Davids and Cameron Delport started brilliantly for the Rocks. Henry David made his intentions clear with a cracking cover drive in the first over off Imran Manack. Henry took Morne Morkel to the cleaners as the opener whacked four fours off Morne Morkel's opening over. The Rocks were cruising on 72 after the end of the powerplay. Davids also featured in the highest first-wicket stand for the Rocks in this tournament of 78 runs, with Cameron Delport. Henry Davids, set up the Rocks' victory with the fastest fifty of the tournament.