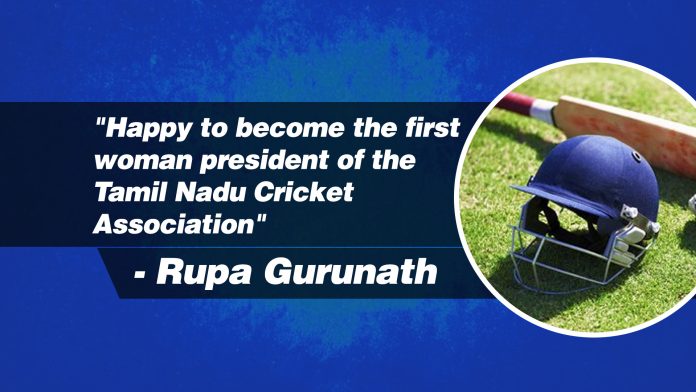 Former BCCI chief Srinivasan’s daughter makes history after becoming the first women President of BCCI state association. The 45-year-old has been appointed unopposed as President of the Tamil Nadu Cricket Association. TNCA is the governing body of cricket activities in Tamil Nadu state of India and Tamil Nadu cricket team. Being one of the permanent test centers, it is affiliated with BCCI.

After her appointment with TNCA, Rupa Gurunath said "I am happy to become the first woman president of the Tamil Nadu Cricket Association. The TNCA has been a professionally run State Association, which has a long history and headed by eminent personalities. My immediate priorities are to finalize the Lease Agreement with the Government and opening the three stands.”

Recently, TNCA has also been in the news for wrong reasons, with unnamed officials, coaches, and players in the Tamil Nadu Premier League being accused of match-fixing. An inquiry is currently going on in the matter to resolve it. Other than her, TNCA has also recruited six other office bearers, a nine-member apex council, a governing council including an ombudsman, ethics officer, and a cricket advisory committee.

Rupa Gurunath also said that she will open the three stands of Chepauk stadium that have been locked since 2013 due to administrative issues between the TNCA and the government. These three stands have total capacity of 12,000.