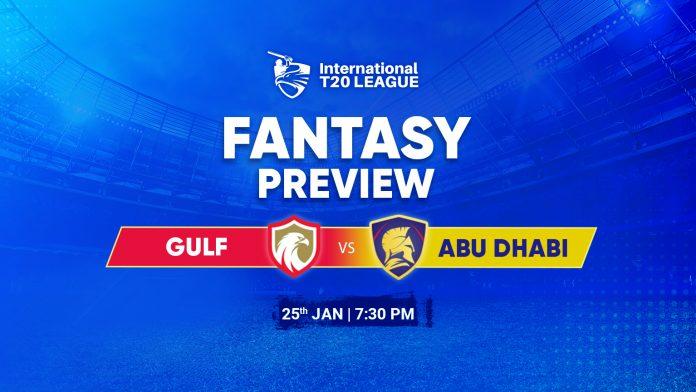 Gulf will need to rebound from their previous defeat and deliver a strong performance against Abu Dhabi. The team will be looking towards key players such as Captain J. Vince, T. Banton, C. Lynn, S. Hetmyer, L. Dawson and David Wiese to provide crucial contributions in the batting department.

In their last match, C. Jordan and D. Wiese stood out with their performances, scoring 37 and 35 runs respectively. The team will need to put in a disciplined effort to secure a victory against Abu Dhabi.

Abu Dhabi will look to bounce back from their previous defeat as they take on Gulf in the upcoming match. The side will be counting on their heavy-hitting batsmen such as B. King, K. Lewis, D. de Silva, C. Asalanka, A. Russell and S. Narine to power them to victory.

In their last match, D. de Silva was the standout performer for Abu Dhabi, scoring 65 runs off 40 balls, while Narine and Asalanka also contributed valuable runs.

The Gulf and Abu Dhabi match will be played at the Dubai International Cricket Stadium. The match is scheduled to start at 7:30 PM on 25th January 2023. Lineups for the match will be available at 7:00 PM on MyTeam11 app.

The Dubai International Stadium has proven to be a good batting track for Gulf. The pitch is expected to favour the spin bowlers, with the surface expected to slow down as the game progresses.

Batsmen will need to display patience and technique in order to post significant scores. The weather forecast for the match predicts light rain and moderate winds.

S. Hetmyer (Gulf): After being quiet with the bat, S. Hetmyer found his rhythm in the last match. Against Vipers, Hetmyer smashed 70 runs off just 35 balls, his innings includes 5 fours and 5 sixes.

A. Russell (Abu Dhabi): A. Russell holds the capacity to knock the ball out of any stadium. However, the season so far has not gone his way. In the upcoming match, Russell will be a player to watch out for.