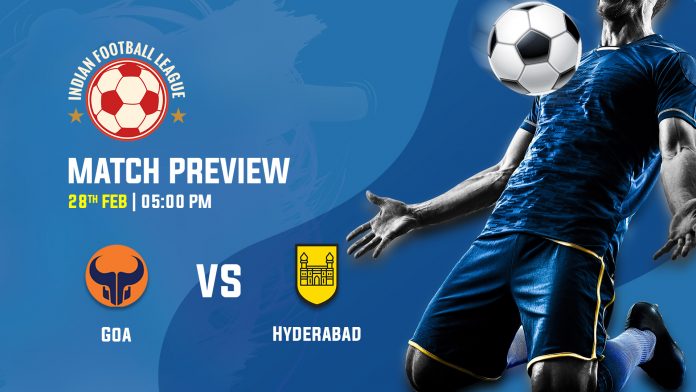 Goa and Hyderabad face each other in the virtual knockout game of Indian Football League 2020-21 to eye playoffs berth. Goa will make through if they manage a draw.

Indian Football League will decide its last two playoffs sides tonight when Goa and Hyderabad will lock horns in Fatorda. Gaurs are on the safe side after having 30 points with a better goal difference. In the last outing, they eliminated Blues 2-1 to step closer towards playoffs. Gaurs dominated proceedings from the start, and Igor Angulo scored the opening goal in the 20th minute. Redeem Tlang doubled the lead with a goal just three minutes later. Bengaluru returned to the game when Suresh Singh Wangjam scored a goal after receiving a good pass from Cleiton Silva.

Goa could have added two more goals in the second half, but Gurpreet Singh Sandhu made fine saves. Hosts have 30 points, and they can go through if they manage a draw here. The victory will also assure the playoff's qualification. Goa are unbeaten in the last 12 matches, and their last defeat came on December 19 when Chennai edged past Gaurs 2-1. Goa suffered only three defeats this season, and all came in the first three weeks of the season. The draw will also be enough to secure the playoff berth, and Goa will keep this in mind. The current performance put them ahead in the race.

Meanwhile, Hyderabad have to pull off something terrific if they want to seal the playoff berth. The defeat or a draw will close the door for Nizams. Hyderabad came close to full three points in the last outing, but an injury-time strike hurt Hyderabad, and they walked away with just one point. The last match will haunt Hyderabad if they fail to find three points against Goa. In just the 4th minute, Hyderabad were down to ten men. They took the lead through Aridane Santana in the 8th minute. Pritam Kotal made a back-pass, and Santana got the ball inside the penalty box. The first half ended in favour of Nizams with a 1-0 lead. Narzary’s shot went wide in the 56th minute, and just one minute later, Mariners equalised through the Manvir Singh strike.

Hyderabad regained their lead in the 75th minute. Akash Mishra took a long throw, and Santana’s header fell to Ronald Alberg, who smashed the ball in the bottom corner. Nizams were confident of gaining three points, but Pritam Kotal offered a heartbreak with the injury-time goal. Hyderabad cannot afford a loss or not even a draw tonight. In the case of a draw, they will finish the season with 29 points, less than Goa and Northeast. Victory will give them a finish of 31 points, and they will surpass Goa in points. Less than victory is a bad thing for Hyderabad. When the last time both sides faced each other, Goa had the last laugh with a 2-1 triumph.

Previous Match: 2-2 draw with Mohun B.