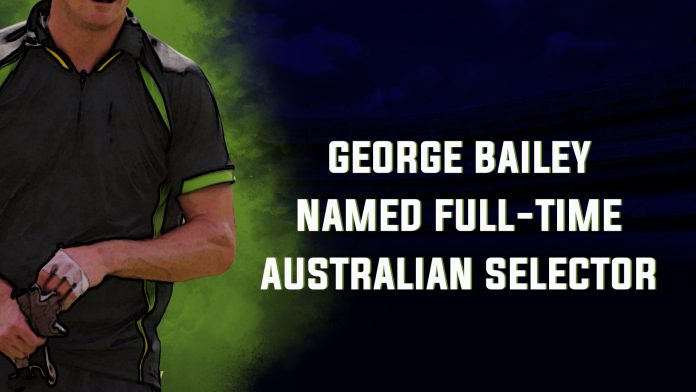 Cricket Australia on Wednesday announced the appointment of Former Australia Twenty20 captain George Bailey as the new national selector for Australia.  George replaces former captain Greg Chappell who retired from his Cricket Australia role as a Selector and National Talent Manager last month. Bailey will initially join chairman Trevor Hohns, and coach Justin Langer as a ‘National Teams Advisor’. Bailey will take on the role full-time after the conclusion of the upcoming Australia T-20 League, which will be his last as a cricket player.

"I have been fortunate enough to contribute as a player for quite a few years, and to now have the opportunity to continue in the role of selector is a tremendous honour," said Bailey.

Ben Oliver, The Executive General Manager of National Teams,  said, “We’re thrilled to have George join the National Selection Panel. He is an outstanding leader and one of the most respected, thoughtful and generous figures in international cricket. George’s international and domestic playing career speaks for itself.”

“His extensive experience across all formats and deep knowledge of T20 cricket will be invaluable as we head into a home T20 World Cup and beyond. We’re also excited about the broader impact that George will have on Australian cricket as we work to connect more closely with players, coaches and high-performance staff across the country,” he further said.

George Bailey has represented Australia in five Tests, 90 ODIs and 30 T20Is. The top-order batsman led the Australian side in 29 ODIs and 28 T20Is where his team won 16 ODIs and 14 T20Is.