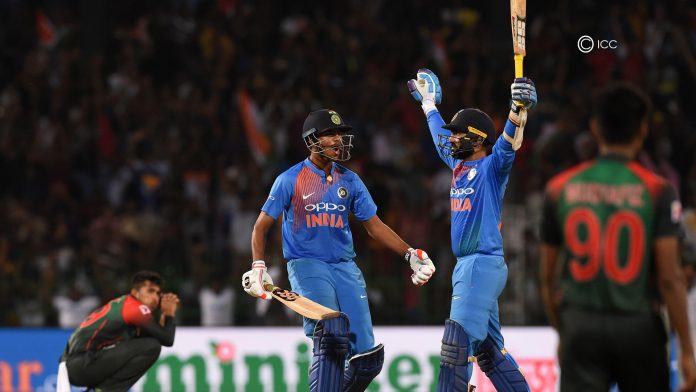 Remember Dinesh Karthik’s shot vs Bangladesh in the Nidahas Trophy on the last ball that helped India nab the Winning team’s title. Well, do you know this event isn’t first of its kind in the cricketing history? Prior to this breathtaking match ending, many other payers have also finished off innings by trouncing a desiring six on the last ball of the match, turning the fate of the match entirely upside-down. Cricket blasters that can turn any last ball a winning ball by striking a magnificent six, have a look:

IND vs PAK has always been an enthralling match or we can call it more of a war between the two countries. It was amid the Australia Asia Finale, 1986 at Sharjah, India and Pakistan opposite each other, Pakistani player Javed Miandad on the crease just four runs needed off 1 ball by Pakistan to win the finale fight. A tough call right? But out of the blues, Miandad hit a scintillating six off Chetan Sharma and helped Pakistan to win the finale with a last-ball six.

With 1-1 winnings in the ODI series of Bangladesh Tour of Zimbabwe in the year 2006, a lot was expected by both ZIM and BAN from the 3rd ODI, which definitely proved to be a vigorously dramatic match for both the playing teams and the audience. The match witnessed a thrilling end when ZIM needed 5 runs off 1 ball to win the match which seemed impossible for the team. But in an event of turning the tables, Brendan Taylor holding tight his bat showed off his brilliant skills by hitting a Winning six at the last ball of the game, a full toss by Mashrafe Mortaza, making the Winning title fall in Zimbabwe’s lap.

The third match on the list that raised the heat and turned out to be a stress-buster for one of the competing teams was the one played between WI and SL in the year 2008 at Port of Spain. It was the 1st ODI of Sri Lanka tour of West Indies with Chaminda Vaas all set to embark and Victory for his team Sri Lanka while Chanderpaul struggled to fight till last, then came the breath-taking moment when WI needed 6 runs over 1 ball. Tension prevailed among the Indies fans but a single stroke and the stadium rejoiced with cheers as Chanderpaul smashed a hard-hitting boundary scoring a six off the last ball and making WI a winner.

It is well said that the history repeats itself. Well, it turned out to be true in case of Zimbabwe as the Harare Sports ground turned out to be a lucky charm for the Zimbabwe cricket team for yet another time. Zimbabwe won an ODI against Bangladesh with a last over six in the year 2006 and then again in the year 2010 ZIM was again entitled as the Winner when Rainsford kept his calm and used his senses to hit a last ball six and defeat Ireland in a thunderous manner.

ICC World Cup, 2011, Sri Lanka and India against each other, Sri Lanka won the toss and opted to bat first setting up a target of 275 to be chased by the Blue Lions. Gautam Gambhir, Mahendra Singh Dhoni and Yuvraj SIngh helped India to get along with the target. After the dismissal of Gautam Gambhir with 97 runs, a score of 52 was to be chased in 52 balls by Yuvraj and Dhoni. At the end of the game India needed 4 runs off 11 balls but Dhoni ended the game in his style, hitting a six and making India world champions after 28 years.

Watching two strong teams with an equity in potential and skills is always a fun thing to do. But this egalitarianism in the skills and play-off can often strike way for an impressive face-off between two teams. One such match was the war between England and India that took place in the year 2012. Eng needed just 3 runs to bag the title of winning team but only 1 ball left, the match seemed to be in the claws of team India, but Captain Morgan took over the game and hit a smashing six on the last ball scoring 3 extra runs for the team.

Pakistan against West Indies, a T20 match and a target of 153 to be chased down by Pakistan. An easy target but skilled West Indies bowlers made this easily attainable target a tough call for the players of Pakistan. One after one, the Pakistani players made their way to the pavilion and it was Pakistani bowler Zulfiqar on the crease facing West Indies gem Marlon Samuels. In an unexpected event, Zulfiqar hit a terrific shot scoring a six on the last ball, clinching the match for Pakistan.

A tremendous face-off between South Africa and New Zealand, 3rd ODI and the craving to win the title could be easily seen amongst both the teams. New Zealand was to bat first and made sure that they give a head-on competition to their opponents. South Africa was left to chase a target of 261, last ball and 3 runs needed to win the match that his when all-rounder Ryan McLaren took matters in his hand and scored off a turbulent six at the last bowl, hauling 3 extra runs for the team.

Anguished by their last defeat with a marvellous last ball six from South Africa, the Black Caps were ready to fight back Sri Lanka with much more energy and skills. Their moment came amid the 2nd ODI in Hambantota in the year 2013. Sri Lankan innings was hit by rain and the team had to pack-up at 138 runs with a loss of 1 wicket in 23.0 overs. As per the D/L method, New Zealand had to achieve a target of 198 runs in 23 overs. Nathan McCullum, last ball of the innings and a hard-hitting boundary. McCullum finished the match with score hovering at 203 with a last-ball six.

The thirst for triumph can play a substantial role in enhancing a player’s skills. You all must remember the IND vs BAN face-off as it was an inning that lit up the entire stadium, rejoicing the Indian fans present over there. Indian fans lost all the hopes when one by one their favourite players packed-up their stuff and left the pitch, that was when Dinesh Karthik showed the magic of his bat, smashing a last-ball six Soumya Sarkar, gifting a last-ball victory to team India.

Well said, destiny can either make you or it can destroy completely. This statement proved to be true in the above scenarios when a single ball turned the game entirely making a winning team a loser. Let’s see how many potential players we have in store that can ensure the occurrence of such incidences in the future. Stay tuned as we come up with more exciting Top 10 cricket stories, till then Keep Playing, Keep Winning at MyTeam11.