From Fame to a Mere Name: Stars Who Shined Too Bright Once, Living in Complete Darkness 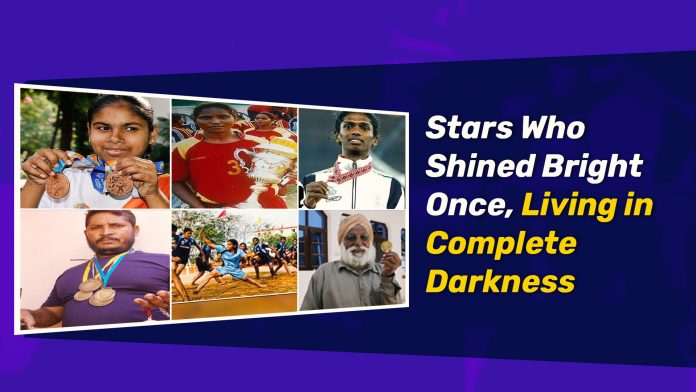 Recently, an old picture of Indian Women’s kabaddi team leaving home with a trophy in an auto-rickshaw went viral on social media. The picture showcased the adverse behavior, we as viewers have towards sports other cricket and sports personalities. The team wasn’t welcomed with any huge crowd, media coverage or flower garlands. There weren’t even proper commute arrangements for the team that brought glory to the nation.

And, that’s just not about one instance. There have been numerous similar situations where people, who made the country proud, received a lot of appreciation and acknowledgment but neither of the two was long-lived. Today, MyTeam11 brings you the story of such athletes who were once a popular star but are now just a name in the old pages of history. Read on to know about such people.

Santhi was riding high on success during the 2003-2006 period, winning gold and silver medals at various prestigious tournaments. However, things took a sudden turn & Santhi’s glass home was broken into million pieces, impossible to be collected back. It was after her win at the 2006 Asian Games that the athlete won a silver medal, which was scrapped off after she failed a gender verification. The failure raised eyebrows on her eligibility for the contest & then there she was, scrapped off her medals, banned from participating in further athletics.

The once a star was forced to take up work at a brick kiln along with her parents. This highlights that the player’s success was not long-lived but what is worse is the disrespect, humiliation, and questions she has to go through.

The 23-year-old athlete is a double special Olympic medalist. She had won a Bronze medal in the 200m and 4x400m relay race at the Special Olympics held in the year 2011. Life had never come easy for the athlete after being born into a street vendor’s family in Rewa. However, her determination and strong-willed attitude proved that nothing could stop an individual from touching heights of success. Things were believed to get sorted for the champion after her win at the Special Olympics, but life has its own rules.

Even after making the nation proud, the athlete was forced to earn a living by selling gol-gappas at her family shop. The odd job earned her Rs.150-180 daily. The player wasn’t even given the rewards promised to her. However, with a bit of media coverage, some of the athletes have come forward to help Sahu.

Kamal Kumar, the once a boxer who won three state-level gold medals in various boxing championships in now working as a garbage collector and a part-time rickshaw puller. The player wanted to make it big as a boxer and even dreamt of becoming a coach, but due to financial constraints, he had to give up on his dreams. Today, neither the pride nor the medals are helping him feed his family, and he has to resort to odd ways of earning.

Sarwan Singh, the man who represented India at the 1954 Asian Games in the 110-meter hurdles race. Completing the race in just 14.7 seconds, he won a gold medal at the event. However, fame & victory couldn’t last long. Singh crashed in front of the biggest hurdle of life, poverty, and the adverse financial conditions made him sell his gold medal for a meager sum of money.

Not just this, Sarwan had too pick odd jobs like driving a cab for around 20 years and working as an agricultural laborer for making ends meet.

Rashmita Patra, a wife, and a mother today was once a shining star of the Indian women’s football team. Patra started playing football at a tender age of 12 and got many achievements registered under her name. Hailing from Orissa, Rashmita has represented her team in various national, and the country in different international tournaments held at various foreign lands including Malaysia, Bahrain, and Bangladesh.

But Rahsmita too had her share of problems and suffering when poverty restricted the player’s growth. Due to unavailability of funds, Patra couldn’t pursue her career and now runs a betelnut shop to support her husband & family.

Kabaddi has been connecting people since long, but the viewers failed to connect with the players of the game. Shanti Devi, a prominent kabaddi player of her time, represented India in various Kabaddi championships, alongside serving as the national team captain during the 1983-84 period. Devi also won a silver medal in the Guwahati National Kabaddi League.

Well, just like other names in this list, Shanti’s career was just a nine days’ wonder. Today, married to a laborer, Shanti sells vegetables at the local market in Jamshedpur for survival.

These were just a few names that we’ve brought into the light; the complete list is a never-ending affair. We agree that our memory is short-lived but at least providing a decent lifestyle, a little acknowledgment and little respect to people who made the country proud at a point, is the least we can do for them.