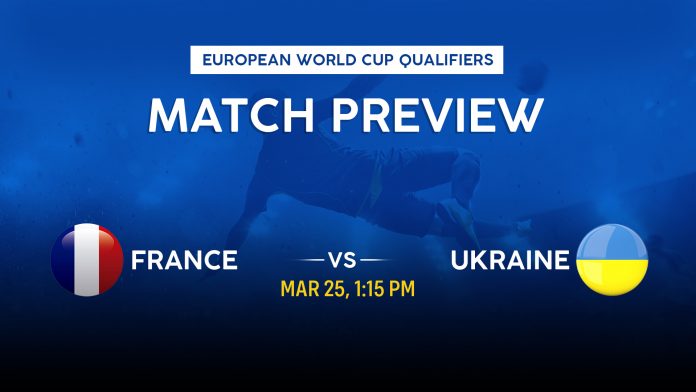 Defending champions France will start their qualifying journey to World Cup 2022 when they host Ukraine in the Group D fixture on Wednesday evening.

Football’s international break starts and the most competitive European qualifier starts with top teams. The winner of World Cup 2018, France will kick start their qualifying campaign against Ukraine. The defending champions would hope to replicate the 2018 success to Qatar in 2022. Les Bleus are desperate to become the third team to defend their WC title successfully after Brazil and Itlay. The road to glory starts with European qualifiers.

Deschamps's men featured in UEFA Nations League and added 16 points from a possible 18. They qualified for the finals and they also beat defending Champions Portugal 1-0. Their most recent win came against Sweden 4-2 in League A fixture. They lost just one match in 2020 and it was Finland that delivered them a shocking defeat in a friendly affair. France will face Belgium next in the semifinals of the Nations League. The qualification process for World Cup should be a cakewalk for Deschamps's side as Les Bleus have not failed to make the finals since 1994. They are the strongest side at home and scored at least four goals in all three of their home games.

Meanwhile, Ukraine had a disappointing campaign in Nations League 2020-21. Andriy Shevchenko's side was relegated down to League B after suffering a 3-0 defeat to Switzerland. They lost their all last three games. They had defeated strong Spain in October but managing a win against France in an away-fixture would be a tough task. Ukraine have to offer an extra-ordinary game to crack the World Cup qualification. They have only qualified for the World Cup once since 1994. They last appeared in World Cup in 2006 when they made into the knockout stage and lost to eventual title winner Itlay in the quarterfinals. France and Ukraine last met in October 2020, and Deschamps's side thrashed Ukraine by 7-1.