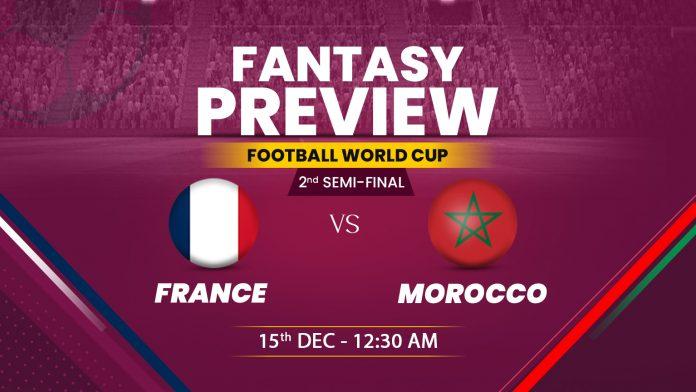 The 2nd Semi-final of the 2022 Football World Cup is upon us. France and Morocco will go head to head at the Al Bayt Stadium. Both teams have played tremendously well in this tournament, especially Morocco. The former World Champions, have the opportunity to seize the victory against the history-making Morccon and bring the World Cup trophy home. This article will provide a preview of the teams and predicted starting lineups for the match, as well as suggested fantasy lineups.

For the second time in a row, France has qualified for the Semi-Finals of the Football World Cup. The French defied all odds and won the World Cup last year in a dominating fashion. Prior to the last World Cup, France once lifted the cup in 1998. Just like the last time, K. Mbappe has been on top of his opposition. The 23-year-old along with O. Giroud and O. Dembele has wreaked havoc on other teams. So far, France has lost a single match, all thanks to Tunisia.

This has been a dream campaign for the Morocco team and the Moroccan fans. World Cup after World Cup, the African nation suffered misery. However, things took a big turn this World Cup and Morocco became the first African nation to play in a semi-final of the Football World Cup. Morocco’s defense is something that has kept them alive in the competition; however, the occasional goals from their strikers also make the team difficult to deal with.

The Al Bayt Stadium will host the tournament’s second semi-final between France and Morocco. The match will kick off at 12:30 AM IST on 15th December and the teams will be announced on 14th December at 11:30 PM IST on the MyTeam11 fantasy app.

K. Mbappe (France): Kylian Mbappe has made a name for himself on the world stage. In just two World Cup tournaments, Mbappe has scored an impressive nine goals in 11 appearances, including five goals in this year’s competition.

A Hakimi (Morocco): The PSG full-back is known for his explosive pace and will be lethal on the right wing alongside Ziyech. Morocco generally sits back in defense relying on their defenders and counter-attack at every given opportunity through Hakimi.