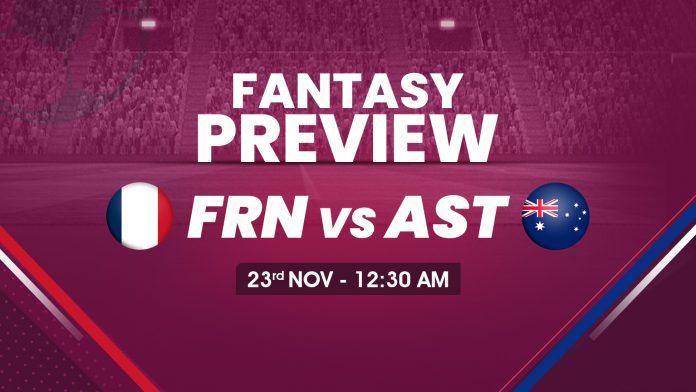 The world champions are set to take on the Australian team in the eighth match of the Football World Cup. However, it might prove to be an uphill battle for the French team because of multiple injuries. France vs Australia will happen at the Al Janoun Stadium at 12:30 am IST. So, let’s dive straight into fantasy prediction for the match. Stay tuned till the end if you want to see suggested fantasy XIs.

An injury-hit France team will play their first match against Australia. French star player K. Benzema has been ruled out of the tournament because of a thigh injury. The defensive line of France is also in trouble as R. Varane is not likely to play in the upcoming match. O. Giroud will be replacing Benzema on the front lines and will be playing aside Mbappe and Griezmann.

The eighth match of the Football World Cup will be played at the Al Janoub Stadium located in the heart of Al Wakarah. The capacity of the Al Janoub Stadium is 40,000 people. The stadium is known for its design which resembles the sails of Qatar’s traditional dhow boats. The match between France and Australia will begin at 12:30 AM IST and lineups of both teams will be available at 11:30 PM IST.

K. Mbappe (France): In the 2018 edition of the Football World Cup, K. Mbappe became the youngest player to score in a World Cup. The PSG striker has been relentless with the defenders and is known for his expressive pace. The 23-year-old striker has netted 28 goals for the national side.

J. Irvine (Australia): J. Ervine is a tactical midfielder and holds a lot of experience playing for the Socceroos. Ervine’s passing ability makes him an important player in the midfield. Furthermore, the 29-year-old player has scored seven goals for his nation.