Footballer Gets Yellow Card for Celebrating Goal by Proposing Girlfriend 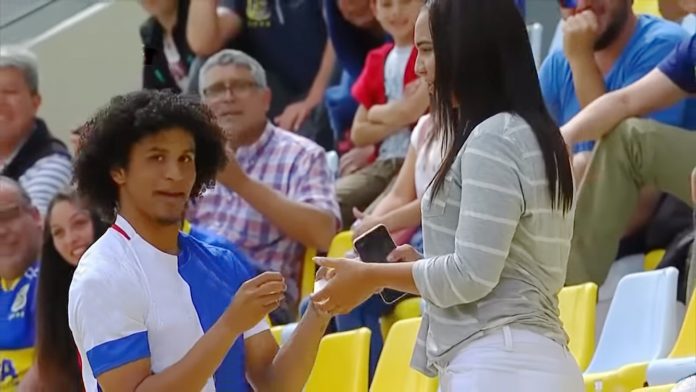 Striking a ball past through the giant man, all set with his defensive skills to stop the ball getting through the net & scoring a goal becomes a moment of celebration for everyone. However, often your actions & celebration gestures land you up in an unwanted, troublesome situation. Well, something, as described before happened with football player Eduard Bello amid the Chilean Primera Division match held between C.D. Antofagasta and Everton.

Bello had big plans to celebrate his efforts of conceding a goal on the field which he eventually executed, landing himself in trouble. Right after scoring a goal in the match, Bello celebrated his victory by rushing to his girlfriend sitting in the crowd and asking her to become his mate till eternity.

Yes, you guessed it right, Antofagasta player Eduard Bello took the opportunity to propose his longtime sweetheart, Gabriela Brito. Eduard soon after scoring a goal ran to his coach to grab a ring and then went to his girlfriend Brito in the stand and proposed her in typical movie style, going down on one knee. Brito, a beach volleyball player, was all startled with the happening and immediately replied back with a “YES!”

It seems that Bello went on to win the competition of love by getting a Yes from the love of his life but failed to convince the on-field referee who gave him a yellow card for this act. NO, it wasn’t for proposing Brito but a player leaving the field amid an ongoing game before he his subbed off is considered to be a bookable offense by football authorities and laws.

Talking about the incidence Brito quoted that now she got to know the reason behind Bello insisting her to come for the game. She further mentioned that she is taken aback by this sweet gesture of the footballer as they never had any conversation regarding marriage. Also, she went on to tell that they will head back to Venezuela & it might be sometime in December.

Unfortunately, Bello was subbed off the game due to an injury, and it seems that he won’t be able to get back on-field anytime soon. Talking about the incidence Bello was cited as saying, "I'm going to be out between three and four months, but I have to be positive. I take with me my family success. Injuries are part of football. Everything happens for a reason. Unfortunately, this injury comes at a very sweet time for me.”

"As for the proposal, I had been thinking about it for a long time, but I hadn't been able to do it. I had the authorization of the club executives and my coach because I knew I would be booked. Thanks to God everything came out in the best possible way," he added about the decision to propose his girlfriend.

This is one of the sweetest manners one can celebrate his victory, but we guess the game authorities don’t approve of it. So it is better for the players to look out for all possible outcomes of their space. We will keep on posting more news & deeds from the football world, so, stay tuned with us for more.