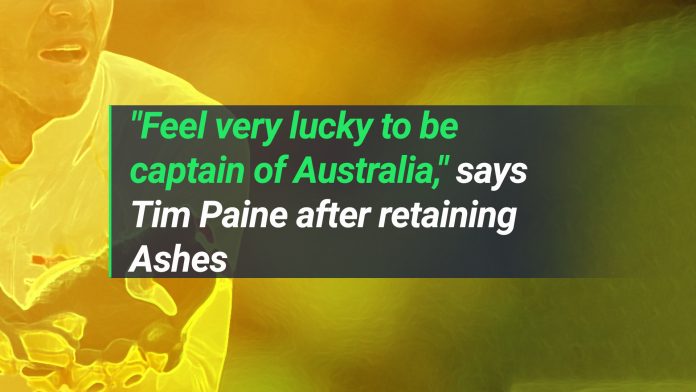 England team decimated Australia in the final Test to square five-match Ashes series 2-2, ensuring the first drawn series since 1972. Australia had already retained the urn after their win in the fourth Test at Old Trafford gave them a 2-1 lead. England’s win at the Oval denied the tourists an overall series win, as the hosts avoided a first home Ashes defeat since 2001.

Tim Paine, who captained Australia to triumph wasn't expecting to be holding captaincy shows till Ashes but went onto help Australia retain the Ashes. Speaking after the triumph, Paine said,  "I didn't think I would still be doing it, to be honest. Very lucky to be in the position I am in and to be captain of a team that has come here and retained the Ashes is something I will never forget."

Paine stressed on the need to keep improving, terming Steve Smith the "best player in the world" and saying that they might be a tough team to beat in the next few years, especially on the back of the kind of pace attack they have. Just that they need to get the rest of the batting unit working.

"Every team needs to keep improving. Steve is the best player in the world and he is still improving. The moment we stop thinking we need to improve there is something wrong. As a whole series, we had a whole heap of good moments in a country where Australia hasn't had a lot of success for a long time. We can be proud of that but have to go. Steve had a great series and won a couple of Tests by himself but we've got a couple of parts that we need to improve. But if we can click them into gear when he is at the height of his powers and with the pace attack we have got, in the next few years we are going to be a hard team to beat," Paine said.

So what was the turning point in the series then? Edgbaston, the fortress, Paine said.

"Certainly Edgbaston. There was so much talk of it being a fortress and how difficult it was going to be for us to start the series. So for us to win that Test quite convincingly gave us the belief that we could do it and gave us a taste of how we wanted to play over here would work. To get that confirmation so early in the series and made it easier for the guys to stick with what we wanted to do."